In an attempt to stay newsy while still expending the least amount of energy possible, JD has added this Tidbits portion, which will display recent comments that might be of interest to the wider JDLand readership while waiting for more in-depth posts to come along. Hey, it's better than nothing.

And Join in on the comment threads to keep even more up-to-date!

Kilwins opened up yesterday across from Nats Park. Didn't wind up going in, but looked like a pretty nice setup from the outside. (submitted by sharksfansd, 6/29/21)

Emmy Squared Pizza opening Friday at 5 pm at its space at 4th and Tingey, sez @thehillishome: link (submitted by JD, 6/9/21)

Just a Verizon store short of the trifecta. (submitted by Andres4Mayor, 6/8/21)

Not sure if this was mentioned in a previous comment thread, so sharing just in case. &pizza is moving into the spot between the ballpark Metro entrance and Buffalo Wild Wings on Half Street. (submitted by sharksfansd, 6/3/21)

Looks like a new District Veterinary Hospital location is coming to the SE corner of the Garrett this fall, according to new window signage. (submitted by RAWR, 5/17/21)

Eat DC is reporting that Toms watch bar is coming to one of the half street locations. (submitted by Jscott280, 5/5/21)

Gregorys Coffee coming soon. Signage up at the former Peet's at Insignia. (submitted by Andres4Mayor, 4/18/21)

This probably doesn't come as much of a shock, but Declaration is officially not reopening: link (submitted by JES, 3/29/21)

The cat was already out of the bag, but here is another Eater DC article on the Silver Diner after it was officially announced by the chain. Looks like it will be open by this time next year. link (submitted by sharksfansd, 3/25/21)

Chicken and Whiskey confirmed, but this Eater article also mentions Silver Diner in this write-up. link (submitted by JES, 3/19/21)

From @barredindc, Pho Junkies is taking over the Roy Boys space in Velocity: link (submitted by JES, 3/11/21)

From @eat_dc: ".@SolaceBrewing has started construction on "Solace Outpost Navy Yard", planning to open this summer. It will feature experimental IPAs and small batch beers in addition to their four staple brews. A casual food menu will include burgers, sandwiches, and refined "ballpark" bites."
link (submitted by JD, 3/10/21)

Vet coming to The Garrett . Per the application it looks like it's going to be Heart + Paw Veterinary Care. link (submitted by Andres4Mayor, 3/7/21)

Not to flood the comments but this seems cool: When Sandlot Southeast comes out of winter hibernation next month, the shipping container bar and events space that rocks to a Go-Go beat in Navy Yard will host a rotating group of chefs, caterers, and food truck operators representing Black-owned businesses. Under a new social equity program sponsored by Uber Eats, Sandlot Southeast (71 Potomac Avenue SE) will grant temporary, rent-free access to two kitchens — a fully equipped food truck outside its lot and a 600-square-foot catering setup with an indoor dining area inside the Maren DC building — to chefs picked by a selection committee. link
(submitted by dcgent, 2/25/21)

For the gents:
A look at Scissors and Scotch, now open at 1 M SE (but still waiting on its liquor license): link

And if you're still feeling scruffy, the Bearded Goat is now open on Tingey St.:
link (submitted by JD, 2/22/21)

And more pics of what's coming nearby: "As the first phase of The Yards continues build-out and plans surface for the second phase, Brookfield Properties is sharing the first views of the pedestrian-friendly street that will bisect the Anacostia Riverfront development. Yards Place will be a curbless, cobblestone street running between Navy Yard Metro and Diamond Teague park on the waterfront. The street will be multi-modal and pedestrian-friendly and will span the six blocks of Phase II, just west of New Jersey Avenue and continuing south to the river." link (submitted by dcgent, 2/16/21)

Seems like a rebranding for the existing Capitol Yards buildings, to include the new "Illume" buildings: link
(submitted by tw81, 1/25/21)

Navy Museum is fundraising for a $450M new spot outside the Navy Yard gates, forecast to be built 2023-2025. The rendering appears to show a new building at 555 M St SE (SW corner with Isaac Hull Ave), about where the electrical substation currently sits across from Joy Evans Park and half a block east of Harris Teeter.

In Yards developer-speak, the new building shown is on Parcel E3, and the low brick warehouse is Building 74. There was a rumor that FCW/Brookfield was in talks to swap land with the Navy Museum, but that seems impossible since the current museum shares two buildings with high-security Navy operations. Maybe the Navy will just buy the site from FCW (though GSA technically owns the land now). (submitted by Westnorth, 10/13/20)

Raze applications have been filed for the buildings on the west side of the 1000 block of New Jersey (the cab garage and the charter school). The second phase of Paradigm's Meridian on First is on the boards for there. (submitted by JD, 6/1/20)

I was going to put up a new post with news of Jeni's Ice Creams coming to 4th and Tingey, Andy's Pizza bringing slices to a walk-up window at Atlas Brew Works on Half Street, and signs pointing to El Rey and American Ice Company coming to the Riverwalk in spaces at the Maren and Dock 79, but with the current news of the world, I think any forward-looking items now need to be viewed through the edges of an N95 respirator and a collapsing stock market. (submitted by JD, 3/9/20)

Albi opening Feb. 20, according to City Paper, which has a preview: link There will also be a daytime coffee offering named "Yellow" coming in spring in between Albi and the adjacent wine bar Maxwell Park, which is supposed to open before spring. (submitted by JD, 2/11/20)

And how would you guys feel about an urban-fast-casual version of IHOP? (not, not announced for the neighborhood, just looking to come to DC in 2020) link (submitted by JD, 12/12/19)

Looks like the 161-unit apartment building on the southwest corner of Half and L (the "chiller" site) is going to get underway before too long (construction permits are already well into their trip through the DCRA Approval Fun Factory), with a construction loan deal announced: link And there's a rendering: (submitted by JD, 11/27/19) 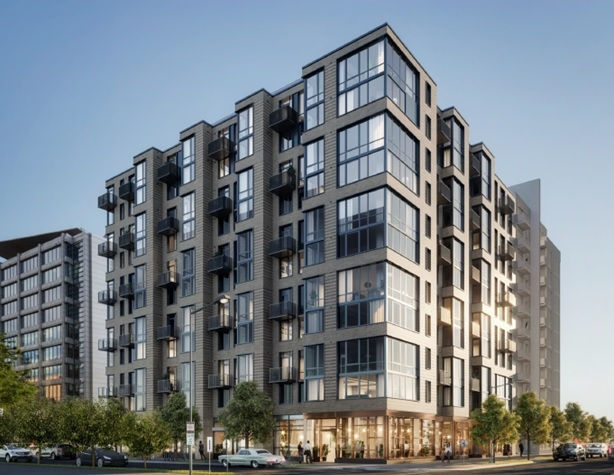 I pressed my nose against the door at Hatoba this evening, the future ramen shop in the Boilermaker Building in the 300 block of Tingey. Dude came out. After wiping my smudge off the glass, he said they were shooting for a soft opening on Friday, October 11 — maybe lunch, maybe 5pm. Stay tuned. (submitted by CJBabyDaddy, 10/8/19)

"La Famosa," an outlet for Puerto Rican food, is coming to the Bower at 4th and Tingey next year: link (h/t CJBabyDaddy) (submitted by JD, 9/27/19)

Somewhere (the Maketto-inspired coffeeshop) opened on Saturday. (submitted by RAWR, 9/3/19)

Roy Boys is officially opening on Thursday with a preview on Wednesday evening that I believe is limited to Velocity residents (according to a building flyer we were emailed). (submitted by JES, 8/27/19)

HipCityVeg is coming to West Half along with Atlas, Cold Stone, Compass Coffee, and The Gatsby. There is also something called Base Bowl. (submitted by NavyYard2015, 8/21/19)

WestHalf is now leasing and has floor plans and pricing posted on the website: link (submitted by GAK, 8/18/19)

The Union Square Hospitality outpost at the new Thompson Hotel at 3rd and Tingey is going to be Maialino Mare, a "Roman style trattoria." link (updated with an Eater link instead of WBJ) (submitted by JD, 8/9/19)

Smorgasburg is cancelled for August. link (submitted by RMP, 8/7/19)

9Round fitness kickboxing is coming to Insignia apts. Saw it on their Instagram today. (submitted by GarfieldPark, 7/27/19)

The Brig is one of the first three bars to apply for a sports betting liquor license. link (submitted by RMP, 7/27/19)

Our former Taylor Gourmet will not be one of the three initially revived. link (submitted by RMP, 7/25/19)

Eater has pics and more on Shilling restaurant link (submitted by dcgent, 7/8/19)