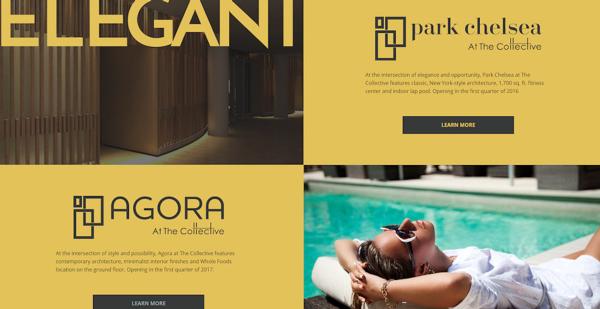 In a sneaky holiday-weekend move noticed by at least one eagle-eyed JDLand reader, WC Smith has posted floor plans and general price ranges for the 436 units soon to be available at the Park Chelsea, at 880 New Jersey Ave., SE. Studios start at $1,700, one-bedroom units at $1,900, and two-bedroom units at $2,900, and one three-bedroom penthouse unit at over $4,800/month for 1,786 square feet of space.
But those little tidbits aren't really the main headline: it's that this information is now found on TheCollectiveDC.com, a combined web site for the Park Chelsea, Agora (i.e., the building currently under construction that will have a Whole Foods on the ground floor), and the Garrett, the planned but until now unnamed third building that will round out the development of the block bounded by New Jersey Avenue and 2nd, H, and I Streets, SE.
It's a vast web site that I won't try to summarize here, except to tell you that there are long lists of amenities, as well as hints of a golf simulator, an indoor basketball court, a tennis court, "indoor green space," and the lap pool we already knew about.
The site says that the Park Chelsea--"at the intersection of elegance and opportunity," will offer "classic, New York-style architecture" when it opens in the first quarter of 2016. Agora, just up the street at the "intersection of style and possibility," will have "contemporary architecture" and "minimalist interior finishes" when it arrives in early 2017 (with the Whole Foods probably needing a few months longer for its build-out). The Garrett, just around the corner at the "intersection of activity and accessibility," will feature "industrial-chic design" when it opens, perhaps as early as 2019.
It's getting so you can't keep all of these projects straight without a scorecard. Let me help you with that.