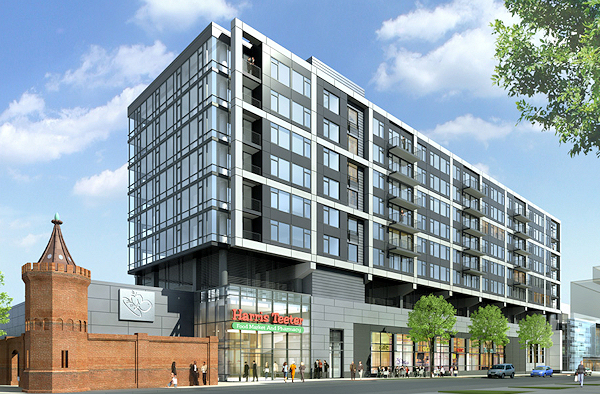 You know how I always like to say that something is expected to happen Any Minute Now? In the case of construction getting started on the southeast corner of 4th and M on the new residential/Teeter/retail building in The Yards, that's now actually a pretty true statement. On Thursday Forest City received the shoring/sheeting permit approval that the project has been waiting for, which will allow the start of digging at the site as soon as some other i's are dotted and t's are crossed.
Also, on Monday night, with almost no discussion, the Zoning Commission approved 5-0 the project's itsy bitsy teeny weeny design modifications discussed recently.
Getting construction started Any Minute Now should allow the Harris Teeter to open in late 2013 or early 2014, if all goes according to plan, though hopefully once the shovels hit the ground, we can get a more detailed timeline as to when the entire project will be finished.
LATE UPDATE: And, just like that, i's have been dotted and t's have been crossed, and Forest City tells me that this project is now considered "commenced."