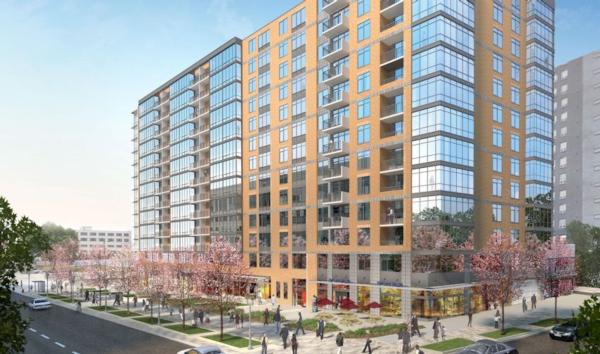 You may have noticed that I only rarely have referred to Donohoe's under-construction apartment building at 1111 New Jersey by its announced name, "Gallery at Capitol Riverfront," because, well, if you can't say something nice....
And my hesitancy appears to have been rewarded, because as a reader noticed, the 1111 development is now "Insignia on M," and its marketing (and presumably management) is now being handled by Bozzuto.
The building, currently under construction right next to (but not truly on top of) the east entrance to the Navy Yard-Ballpark Metro station on the northwest corner of New Jersey and M Streets, SE, will have 324 units (a mix of studios and 1- and 2-BR units), and 11,000 square feet of ground-floor retail, along with the increasingly standard amenities found in new "luxury" buildings. 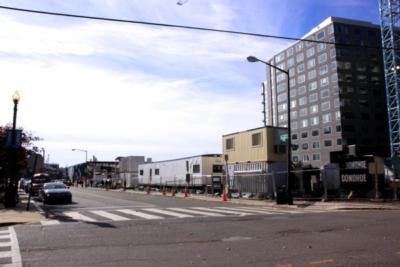 The building's progress up to now has not been lightning quick, with vertical construction only beginning to reach ground level nearly 15 months after site-clearing began. (Digging a big hole immediately next to a Metro station and tunnel is not undertaken lightly.)
At least with this change there's finally some new renderings available of the design by WDG Architecture. The one at the top of this post shows the view looking south along New Jersey Avenue from L Street, the same view as seen in this photo from a few days ago, standing near the small patio space at the Courtyard Marriott (though without that big white building in the distance).
Here's a few additional renderings that I purloined from the official web site, showing the roof view (left), and the ground-floor retail facing M Street (middle) and L Street (right, with the lovely pink of Ann's Beauty and Wigs clearly shown at right). You can see more renderings at the official web site and at Donohoe's site. And there's my project page, for more history and photos. 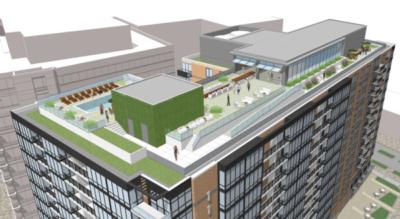 And this is not really the most major change this project has seen, because originally 1111 New Jersey was going to be a 250,000-square-foot office building, before the decision was made in 2013 to go residential.
This is the second renaming I've posted about this week, after the Lofts at Capitol Quarter appeared to get re-dubbed as The Bixby, though I think the Housing Authority maybe ain't all hep to that notion.
But that's not all! There's another residential project that has an official name previously unmentioned here, and it is...
Nov 19, 2015 8:36 PM
The Whole Foods Building? Say Hello to 'Agora' 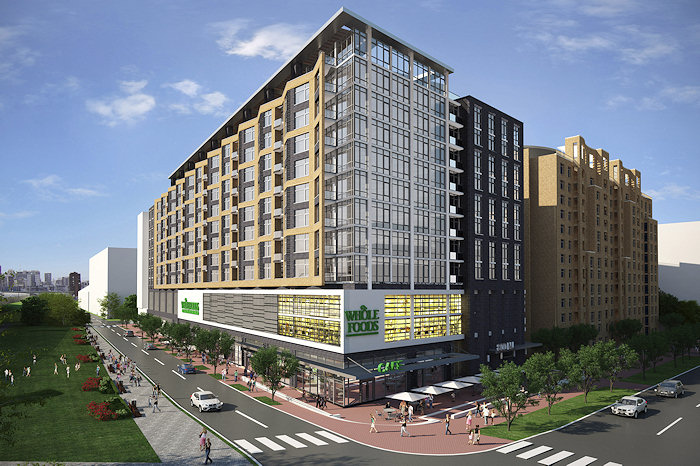 So, we've got the Lofts at Capitol Quarter becoming the Bixby (perhaps), and 1111 New Jersey ditching "Gallery at Capitol Riverfront" for "Insignia on M." Time to fill out the lineup by finally getting around to mentioning that the 336-unit residential building currently under construction at 800 New Jersey is going to be named:
Agora.
This is the project better known as "The Whole Foods Building," on the north end of New Jersey Avenue just south of the Southeast Freeway and immediately to the north of the Park Chelsea. It's the second of three planned apartment buildings by WC Smith on the block bounded by New Jersey, 2nd, H (to come), and I (to come).
Construction started in June of 2014, and is now just coming out of the ground, while residents for many blocks in all directions tap their toes waiting only somewhat patiently for the 36,000-square-foot Whole Foods Market that is signed for the first floor.
I cannot in any way lay claim to being the fast out of the gate in mentioning this Agora news, since it was in a BID newsletter back in July. I meant to mention it sooner, but I also thought that at some point WC Smith would unveil it. Also, it was July. It was hot. I was tired.
As for what "Agora" means, Wikipedia says in its entry on the ancient Greek marketplace of that name that "the literal meaning of the word is 'gathering place' or 'assembly.' The agora was the center of athletic, artistic, spiritual, and political life of the city." (There's a few other Agora entries as well, including a very early "email" browser.)
I doubt this is the end of the naming dance, either, since you have to figure there will be "real" names for 909 Half and 82 I/801 New Jersey and 1244 South Capitol.
I have, however, updated my maps and project pages with all these new names.
(I should also note that this Agora shouldn't be confused with this Agora.)
Nov 19, 2015 3:45 PM
Gas Station Canopy at South Capitol & N Finally Bites the Dust 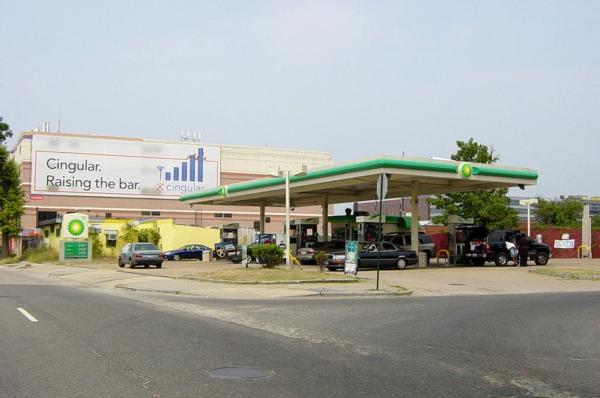 A mere eight years after shutting down, the BP Amoco station on the northeast corner of South Capitol and N Streets is 100 percent no more, with visual confirmation coming via Twitter of the tearing down of the canopy that had remained standing since 2007.
This can be considered the opening salvo in the construction of JBG's 290-unit apartment building at 1244 South Capitol Street, which I mentioned last week would be getting underway Any Minute Now.
For much of its post-gas station existence, this site immediately north of Nats Park was used as a parking lot during Nats games, but during the summer of 2015 it was home to Hill Country's game-day barbecue pop-up, "The Home Stand."
As for the canopy, it's enough of a demolition to memorialize it as entry number 173 in my Demolished Buildings Gallery. (If you haven't wandered through the gallery, it's quite a stroll down memory lane.) The photo above shows the gas station still operating, in August 2005.
The apartment project is expected to be finished in late 2017 or early 2018. And soon I'll have (yet) another hole to look into.