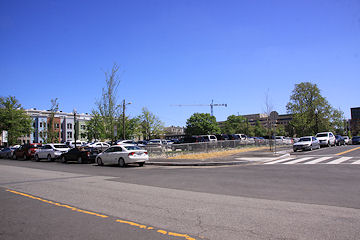 At a community meeting Tuesday night to discuss the DC Housing Authority's development plans for the block between 2nd, 3rd, I, and K known as Square 767, DCHA executive director Adrianne Todman confirmed that the agency is continuing to work on a two-building plan for the site: a 120-unit market-rate condo building that would be developed by EYA and partners, and a separate rental building that would be a mix of public housing and "affordable" units.
While the designs of the buildings and specific numbers as to the exact number of units and the income-requirement structure aren't yet available (and probably won't be until the Housing Authority submits its second-stage PUD filing to the Zoning Commission), a presentation slide referred to "48-67 affordable rental units." It was also said that the design of the buildings will be the same, with the same architect and materials for both buildings, and that the rental building will have ground-floor retail facing Canal Park.
And, because I'm a sucker for the deep official detail of zoning filings, I'm going to wait until that second-stage PUD hits the streets instead of delving into too much more into the details given at the meeting, especially given that it sounds like there is still some level of fluidity in the plans (Todman quickly mentioned at one point that she asked her team to "look at adding some market-rate [units] as well") and given that their zoning encyclopedia David Cortiella was not in attendance. But at the very least it seems to be a concrete decision to "integrate different incomes" in the rental building.
Todman did emphasize the Housing Authority is still in pursuit of its "prime directive" to rebuild the 707 units of public housing that were in Capper/Carrollsburg before it was demolished (398 available so far, 309 to go), and also getting as many of the original Capper families back to Near Southeast if they wish to return. And many of the questions from audience members centered around the issue of returning families, the use of vouchers in the new buildings, and the current lack of affordable ownership opportunities.
One other interesting theme that Todman mentioned a couple of times is how in comparison to other DCHA properties, the Capitol Quarter townhomes are "mixed income on steroids," with levels of diversity in both income and race that the Housing Authority just did not expect when planning Capper's redevelopment more than a decade ago."We have to work harder to make it a more seamless community," she said.
In other Capper-related tidbits passed along at the meeting: the opening date for the Community Center is now anticipated to be April 2016, and the financing deal for the 181-unit mixed-income apartment building planned for the south side of L Street SE between 2nd and 3rd (Square 769N) is expected to be completed in the spring as well.
It looks to be early 2016 before the Square 767 second-stage PUD will be filed, so until then, further specifics for this block may remain hard to come by. But I shall remain vigilant.
Nov 17, 2015 7:56 AM
City Looking at Using 49 L Street as a Homeless Shelter 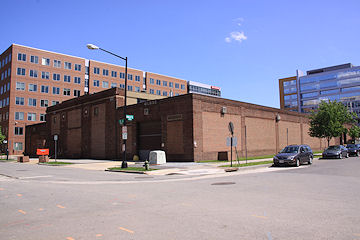 While it needs to be stressed that there is currently no evidence of this being a done deal, it should be passed along that city officials have apparently been considering renovating the old GSA warehouse at Half and L Streets, SE, into a shelter for homeless families.
This is the building that was the subject of a drive back in 2013 by residents who hoped that it could be transferred to city control and eventually become a "market and community space" called the Half Street Market. And it was a little over a year ago that the news came out that the federal government was indeed looking at swapping the building for construction services to be provided by DC at the St. Elizabeth's/Department of Homeland Security site.
My understanding is that Ward 6 council member Charles Allen, while acknowledging the need for such a shelter, is not in favor of using this particular building in its current one-story warehouse form for such a project, citing the loss of potential development above ground level on the site as well as retail in a space so close to both the Navy Yard Metro station and Nationals Park just down Half Street.
(And, it must be said, the optics of having the words "warehouse" and "homeless shelter" so closely tied together are a bit cringeworthy.)
The building is also getting a new neighbor on its southern end, as a Homewood Suites hotel is currently under construction at 50 M.
I sent a request on Monday to the mayor's press office for additional information, but haven't as yet heard back. If I do (because you know how top-level offices love responding to requests from low-profile bloggers), I'll update this post.