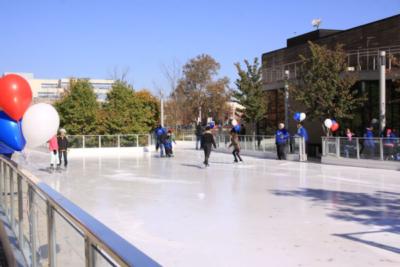 It's been a bit of a moving target, but it's been announced that the Canal Park Ice Rink is opening at noon tomorrow, Friday, Nov. 13.
The rink also now has a Twitter account at @SkateCanalPark as well as its Facebook page.
The hours of operation as currently listed on the web site are noon to 7 pm Mondays and Tuesdays, noon to 9 pm Wednesday through Friday, 11 am to 10 pm on Saturdays, and 11 am to 7 pm on Sundays. There are also special "Cartoon Skates" from 11 am to 1 pm on Saturdays, "Rock n Skate" from 7 to 9 pm on Fridays, "2 for 1 Tuesdays" from 4 to 6 pm Tuesdays, and "College Nights" on Thursday from 6 to 9 pm.
If you have never laced up and gotten on the ice, there are Learn to Skate lessons, starting November 21. (Or you can be like me and hold onto the wall for 45 minutes.)
There's also birthday party packages as well as private rentals ($1,000 for two hours of private ice time).
There will then be an official Grand Opening on Nov. 21. No details on those festivities as yet, but I imagine those will be announced before long.
Nov 12, 2015 12:20 PM
Project Updates: Upward Bound, Plus Some Digging 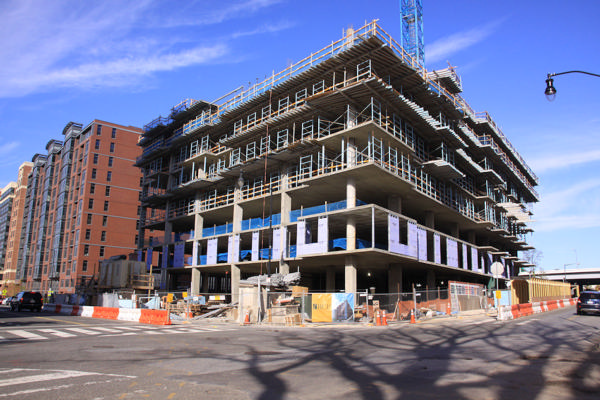 This week I've looked at the buildings that are far along in their construction, and I've looked at the newest topped-off project, and I've even mentioned the project that is just about to start digging, so what's left? A mere seven projects that are in their vertical construction phase, at various levels of out-of-the-ground.
We'll start with 801 New Jersey/82 I (above/left), now a smidge more than halfway toward its eventual 13-story height. This is the Graystar/RCP 227-unit apartment building that is expected to open in 2016.
Just up the block is 800 New Jersey, aka the Whole Foods building, which looks just barely out of the ground from New Jersey (below left), but if you venture up 2nd Street (below right) you can see evidence of the ramp for the grocery store parking that will be on the second and third floor. (Resident parking will be below ground, shared with its sibling the Park Chelsea and the eventual third residential building along the east side of the block.) This building will have about 336 rental units: 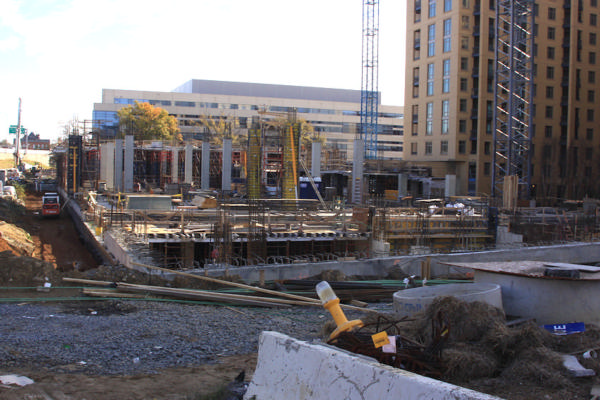 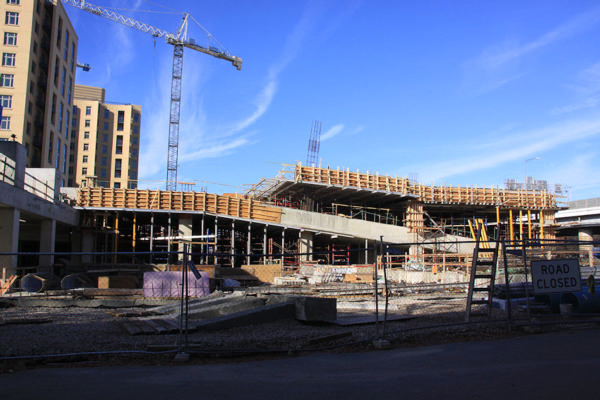 Two projects have at least some hint of their first floors built: the 380-unit building at 909 Half Street will be a lot larger than this small section of construction at Half and I makes it look like at the moment (below left), while the Homewood Suites at Half and M really does also have a portion of its first floor built, though the nasty late fall shadows make it hard to see. 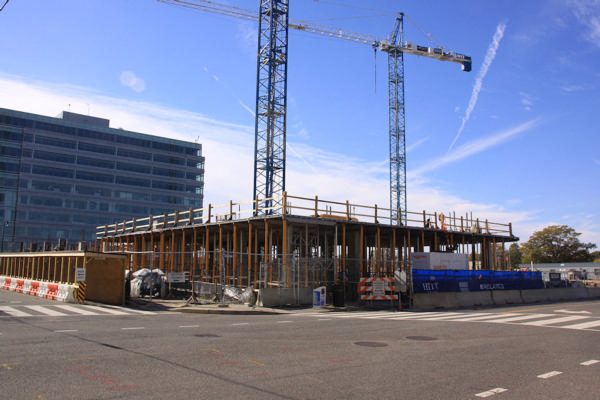 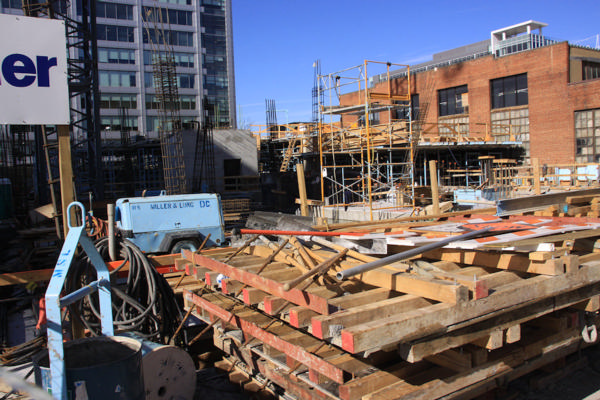 Next up are three projects that are technically out of the ground, although it's just rebar breaking the plane at the moment, but concrete shouldn't be far behind. Behold terribly unexciting pictures of the status of the F1rst residential project and the Residence Inn immediately to its north, plus the Gallery at Capitol Riverfront/1111 New Jersey. 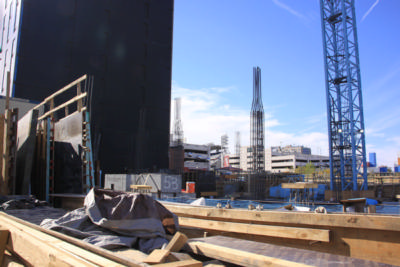 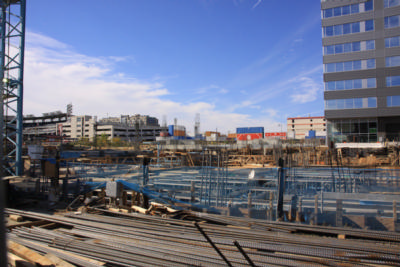 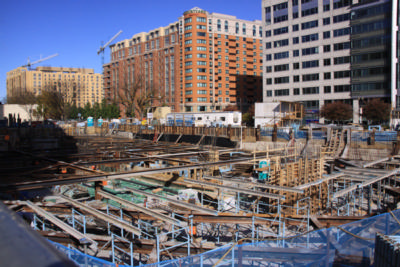 But if you like photos of holes being dug, you're still in luck. There's now clear evidence of the excavation work at Skanska's 99 M office building project, and while nothing will ever really arise from the cut-and-cover work on the new portion of the Virginia Avenue Tunnel (seen here looking west from 5th Street) it's still digging. 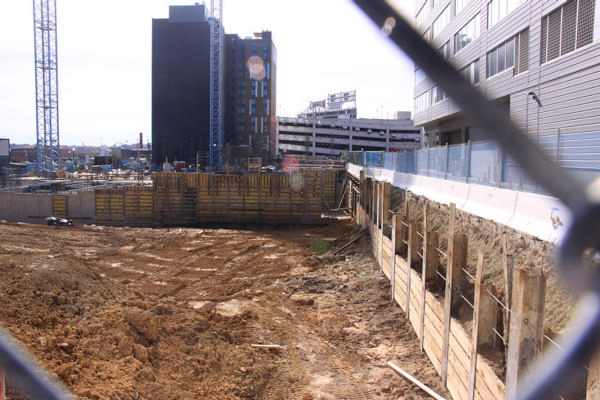 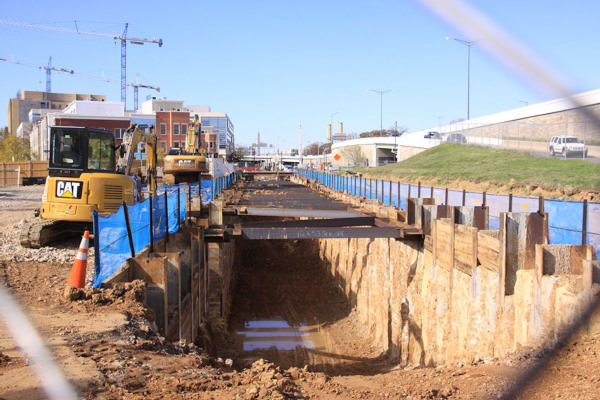 In the midst of all of these updates over the past few days, I did some redevelopment of my own, and finally created individual pages for the Square 701/Not-Ballpark-Square trio of projects, so now you can check out the progress on the Hampton Inn, F1rst/Residence Inn, and 99 M in a less jumbled format.