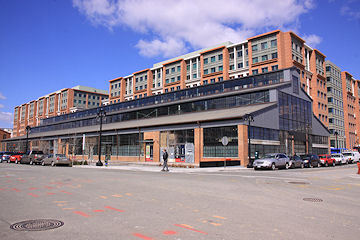 With Bluejacket Brewery and its Arsenal restaurant having now opened to the public (with a launch last night that would be the envy of most restaurant/bar operators), the Neighborhood Restaurant Group is now putting the finishing touches on sibling operation Buzz Bakery, next door to Bluejacket at the Boilermaker Shops at the Yards.
The original plans were to open this morning, but the bakery then tweeted that "there's still a little beautifying & final touches that need to happen," and a sign on the door now says that it will open Thursday at 7 am.
Buzz's web site doesn't yet have information on this location, {deleted}. UPDATE: Buzz Bakery has gotten in touch with me and said they don't know what their hours will be yet, but that they will be different from their other locations and so would I please remove the part of this post mentioning the publicly posted hours for their Ballston location. {shrug}
Buzz and Bluejacket are on the east end of the Boilermaker Shops, at 4th and Tingey streets, SE. They join Nando's Peri-Peri, Wells Cleaners, and GNC Nutrition in the building, with Willie's Brew and 'Que and 100 Montaditos slated to join them in the future.