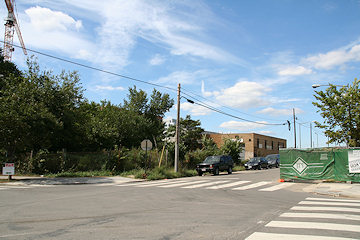 According to the city's land records, on October 7 Akridge paid $4.65 million for the three properties totalling about 7,000 square feet on the south side of K Street between New Jersey and First, all owned by the Cohen family. (Currently on these properties are a defunct garage and an empty lot, as seen in the photo at right). Akridge already owns the lots along First Street south of K down to the Market Deli at L Street; and, from what I can see in my very-unlearned reading of other land records, it also now has agreements with both the Market Deli and the cab garage on the northwest corner of New Jersey and L.
The only non-Akridge lots left on this block (known as Square 740) are two tiny lots directly behind the Market Deli on L Street and the buildings in the middle of the block along New Jersey where Positive Nature used to operate. (I'll also note, for those for whom this actually means anything, that the Positive Nature lots were the recipients of 52,000 square feet in transferable development rights earlier this year.)
This block is kind of the "last frontier" in the neighborhood, the only one without any sort of large development announced anywhere on it.