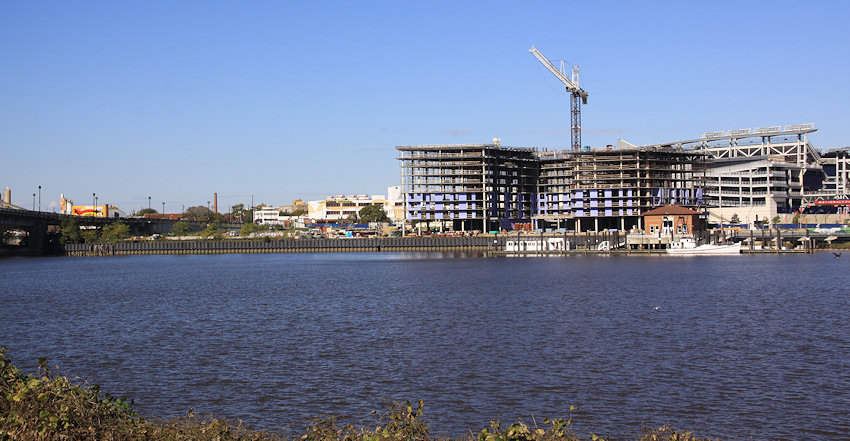 * BARDO RIVERFRONT, AGAIN: Last week a new "placard" was posted for an alcoholic beverage license application for Bardo Riverfront, the proposed combination outdoor brew pub and family-friendly riverfront park at Florida Rock.
This is Bardo's second attempt at the ABC process for this site (the first placard having been rescinded just a few weeks after a filing in August), and is now technically the fourth time that the notion of a large outdoor activity/party/drinking/whatever space has been attempted at this spot across from Nats Park.
This application is for a Retailer's Class D Tavern license (as opposed to a Class C Tavern license last time), and is described thusly: "Outdoor Beer Garden. Beer made on premise. Food Trucks to supply food. Total number of Summer Garden seats: 700. Total Occupancy Load: 750. Brew Pub Endorsement."
As to why Bardo's application earlier in 2015 never made it all the way through after being announced back in March, one might want to read this transcript from the April hearing at the Alcoholic Beverage Control Board to see the many (many) concerns raised by the board and by MPD, which clearly is not supportive of any venture of this type in this location. (And I can't not highlight the comments from Commander Jeff Brown of MPD about how the "applicant here says it's going to be cornhole bean-bag toss, which I'm not even going to pretend to know what that is, but I think I'll be safe to say that it's not very popular.")
* DOCK 79 FLOOR PLANS: While the potential Bardo Riverfront footprint is on the western, later-phase portion of the Florida Rock site, construction is progressing on Dock 79, the 320ish-unit residential building at the east end of the property (seen above from across the Anacostia River at Poplar Point). The project's web site and Facebook/Twitter accounts having been active for a while, and there are now virtual tours available of studio, 1-bedroom, and 2-bedroom units, as well as the roof.
* JUST BECAUSE: Like that photo up top? Here's the same spot, more than 10 years ago.