1 Blog Posts
Sep 28, 2011 2:51 PM
Land Acquisition, Design Work to Start for South Capitol Street
Just sent out by DDOT: "Today the District Department of Transportation (DDOT) announced the start of land acquisition and preliminary design work for the South Capitol Street Project, which includes replacement of the current Frederick Douglass Memorial Bridge. [...] While the Record of Decision (ROD) is still pending, the Federal Highway Administration signed the project's Final Environmental Impact Statement (FEIS) following the requisite 30-day public comment period that ended in May."
I'm posting quickly, so I shall now crib unabashedly from my post on the Final EIS, from back in April:
If you are interested in this subject, there is more verbiage and documentation accompanying the plans than you could ever dream of. (Traffic studies! Environmental consequences! Technical reports!) And I've written a lot about the process, which began more than a decade ago with other studies before the EIS got underway. And I'm sure there will be posts on other blogs delving more specifically into portions of the plans. But, since most people probably want to know "what does this mean for me?", you can see this graphic (from the 224-MB chapter 2 of the FEIS) giving a quick overview of what changes are planned along South Capitol Street if the final EIS is signed off on (and, more importantly, if funding is secured). The short version, for the west side of the Anacostia: 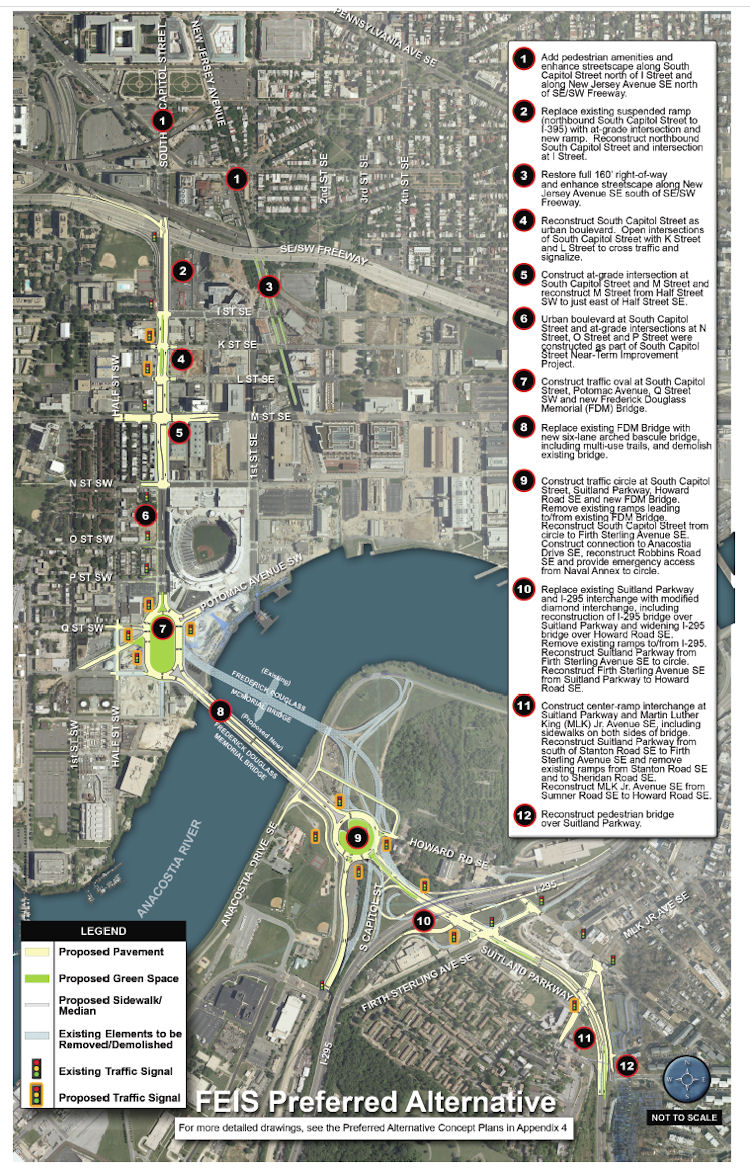 * Add "pedestrian amenities" and enhance the streetcape along South Capitol north of I and along New Jersey Avenue SE north of the freeway.
* Replace the existing ramp to the freeway from South Capitol and I with an at-grade intersection. (This would be a left turn onto a ramp to the freeway from under the freeway, near the current Nats HH economy parking lot.)
* Bring New Jersey Avenue SE back to a 160-foot full right-of-way, and add streetscape enhancements.
* "Reconstruct South Capitol Street as an urban boulevard." This means bringing M Street up to an "at-grade" intersection (no more tunnel), and would include new signalized at-grade intersections to allow traffic to cross South Capitol on K and L streets. (M Street would also get reconstructed between the Halfs [SE and SW].) The section of South Capitol north of M would have the same streetscape that the south portion received during its 2007/08 makeover, with wide sidewalks and a tree-lined median.
* Build a traffic oval at South Capitol, Potomac, Q, as the gateway to a new arched bascule-design Douglass Bridge that would have wide "multi-use trails" (i.e., sidewalks!) in both directions. The existing bridge would be demolished, after the new bridge is built somewhat downriver of the current location.
The Executive Summary (220 MB PDF) gives a good overview of the FEIS and preferred alternative (as it should!), but I also suggest wandering through the Chapter 2: Alternatives section, especially if you came to the neighborhood or JDLand after 2008 and didn't get to follow along during the EIS process, or if you're interested in the additional plans for east of the river, which I'm going to leave to others to discuss. My previous posts on all of this may be of interest as well. If you're wanting to see some of the earlier studies referenced in the FEIS, there are links to them at the top of my South Capitol Street project page.
How much would this all cost? The preferred alternative is priced in this final EIS at $806 million in FY 2014 dollars. (New bridges are expensive, you know.) Note that nothing in today's statement from DDOT says anything about funding, or a construction timeline.
You can also check my South Capitol Street and South Capitol Street Bridge page for all the info about the plans, along with my scores of posts over the past few years.