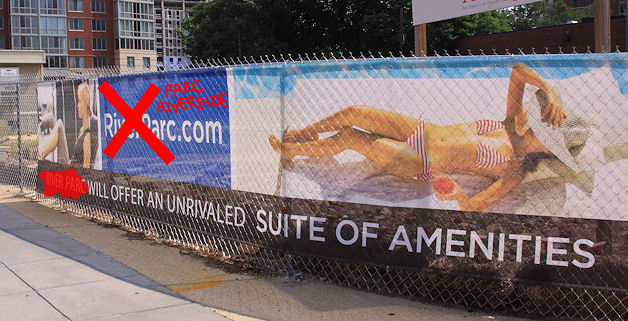 It always seemd a little odd that Toll Brothers chose "River Parc" as the name for the new apartment building now in its final stages on the southwest corner of 1st and K--after all, there's been the mid-century goodness of the River Park townhouses and apartments over in Southwest since, well, the middle of the 20th century.
A few weeks ago, promotional signage went up across street from the new building, trumpeting RiverParc.com, and all systems seemed go. However, a reader passed along the news today of an e-mail from Toll Brothers announcing that River Parc is now the Parc Riverside.
River Parc/Parc Riverside, which according to the e-mail is now expected to deliver in November, does now have a functioning web site, with floorplans, lists of amenities (hey, everyone gets a garbage disposal!), and a few new renderings, but not the rental prices that I'm sure people would like to see at this point.
And now I shall go do a River Parc/Parc Riverside search-and-replace all across my site.
UPDATE: And, oops, I guess I should have included that the leasing office will open this coming Monday, Sept. 22.