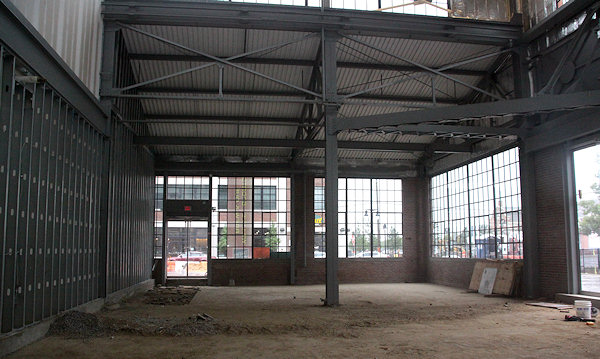 A reader pointed me today to a new Facebook page for Willie's Brew and Que, the long-delayed sports bar that was first announced as coming to the Boilermaker Shops back in 2011.
It's been a busy day on the page, with a new logo posted ("Willie's, Est. 2014") as well as photos of the interior, including shots of the point of sale kiosks with the caption "Computers almost up and running!" There's no news there of an opening date, but the About page is well filled out with details. (The WilliesBBQ Twitter feed is silent so far, however.)
Certainly with October baseball looking staggeringly likely, it would behoove any restaurant or bar in the neighborhood to rush preparations to completion in order to capitalize on hordes of wild-eyed Nats fans converging on the area. However, the long delay in building out the space, followed by the bankruptcy and associated falderal surrounding owner Barracks Row Entertainment earlier this year, have made it easy to be skeptical that the restaurant would actually ever open.
So, keep an eye on the western end of the Boilermaker Shops (at the corner of 3rd and Tingey) to see if white smoke from barbeque equipment signals the arrival of a new restaurant.