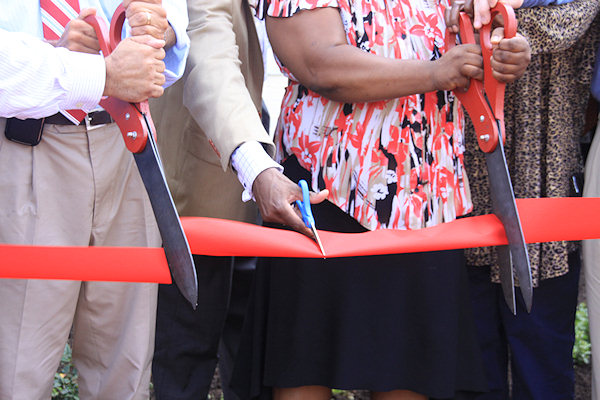 More than five years after the first demolitions at the old Capper/Carrollsburg public housing complex, city officials, developers, and residents gathered at Fourth and L today for a ribbon cutting at what is now known as Capitol Quarter, the mixed-income townhouse development that's been under construction since last year. (Residents actually started moving in this spring, but let's not spoil the party.)
As most readers know by now, the old 707-unit Capper complex is being replaced with what will eventually include 1,500 residential units (with a one-to-one replacement of all 700 public housing units), 700,000 square feet of office space, and 50,000 square feet of retail. Two apartment buildings with 300 units for low-income seniors and moderate income residents--Capper Seniors #1 and 400 M--opened in late 2006 and 2007; four more mixed-income buildings will eventually be built on lots by Canal Park.
My photos of the festivities are posted--and enjoy them, because there aren't many ribbon cuttings in Near Southeast's near future!

I also finally updated my photos along Fifth Street this morning, and at Fourth and I and Fourth and K yesterday and today, making for a pretty striking batch of before-and-afters, especially since these are the first photos I've taken since the framing really took off on the north side of K. Also, digging is now getting started on the final block of phase 1 (Square 797, between Third, Fourth, Virginia, and I), and framing should begin in October or November, with those final first phase homes expected to be finished next spring. When will phase 2 start sales and pre-construction? As soon as they get some money, and everyone knows how easy that is right now....
I will be adding some new mid-block photos to my Capitol Quarter Phase I page, and freshening it up a bit, later today.