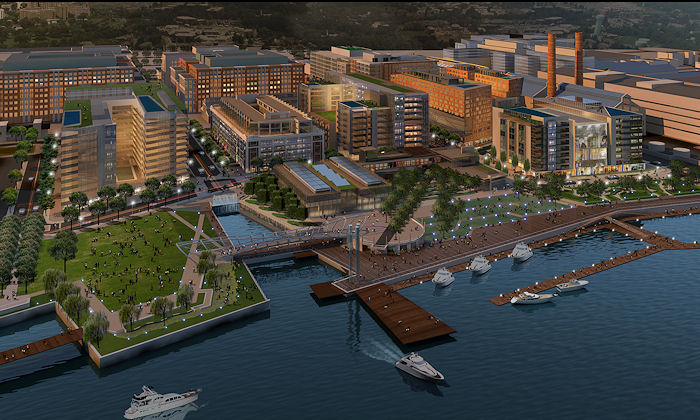 It's more than six months away, but the second phase of the Waterfront Park at the Yards is now scheduled for a Zoning Commission SEFC Overlay District Review on March 2, 2009 (after having briefly been scheduled for Nov. 17, 2008). It's in this review that we'll see the plans for the renovation of the Lumber Shed into a glass-walled retail building, plus the designs for two new two-story retail pavilions connected to the shed's east side. There will also be the first look at the proposed "public art tower" that Forest City is wanting to build right on the waterfront at Third Street.
You can see early designs for the three retail buildings (and the position of the art tower, if not the design itself) in the rendering on my Yards Park page, right at the center, and of course plenty of photos of what the area currently looks like.
One other project at the Yards park that is just starting to pop up on the radar is a new "main campus building" for Living Classrooms of the National Capital Region, to be located on the far eastern edge of the park (just off the right edge of the rendering), along the waterfront just before the park meets the Navy Yard. Living Classrooms is a non-profit group that "uses maritime settings, community revitalization projects and other challenging learning environments" to provide hands-on education and job skills training for students (especially at-risk youth). They will be handling the design and management of the new environmental center at Kingman Island further up the Anacostia, and currently operate out of Building 74 at the Yards (the little brick building--to be townhouses someday--just west of Hull Street at M, seen here). And, according to their web site, Living Classrooms has been "asked to oversee and manage marina and some waterside activities" at the new Yards park.
There is no timeline for when Living Classrooms' new building will get underway. It's currently in the design phase (see an early rendering here), and when that's completed, there will be a fundraising drive to finance the project.