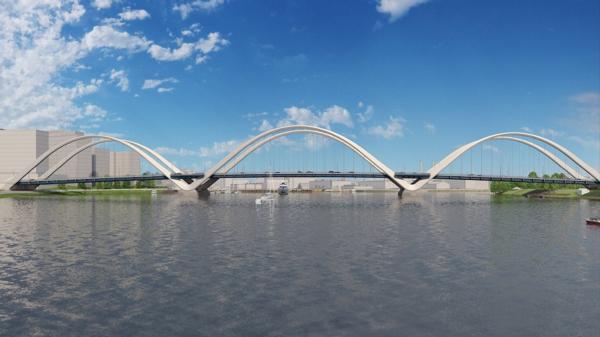 I don't get truly surprised too often anymore after 13-plus years in this gig, but when I clicked the link for this Washington Post article, "DC Unveils Plans for New Frederick Douglass Bridge," I most certainly did not expect to see a completely new design of the bridge that has been on the boards to be replaced for well over a decade.
Gone is the arched bascule design that was chosen many moons ago, replaced with a showier look using three sets of parallel arches. (I will await more detailed renderings before assuming that the bridge has the same multi-use paths on each side of the bridge as the previous design did, though the Post article says there is at least one.)
The plans for building the new bridge immediately south of and parallel to the old bridge have not changed, and there will still be large traffic ovals on both ends.
A $441 million design-build contract has been awarded to a joint venture of Archer Western Construction and Granite Construction Company, and AECOM is the lead designer. This phase also includes the reconstruction of the interchange of Interstate 295 and the Suitland Parkway.
The Post article says that the new bridge is "projected to open in 2021."
Here's a few more graphics purloined from the Post piece--hopefully DDOT will post their video of the design soon and I'll add the link. 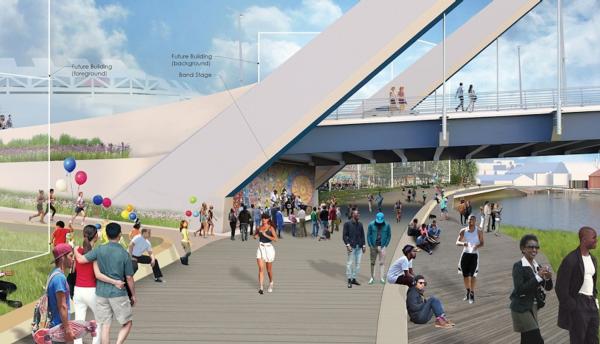 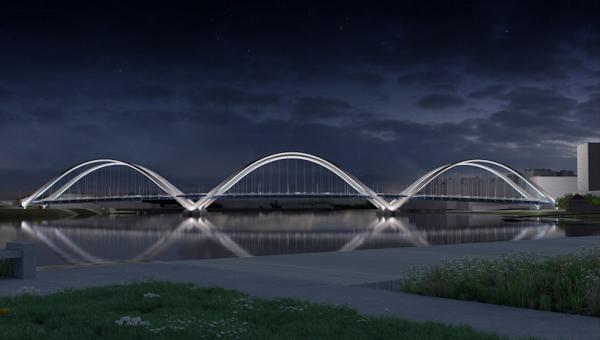 It'll take me a little while to update my South Capitol Street Bridge project page, but in the meanwhile it's a nice trip down memory lane and includes more information (current as of the last time the city announced information about the project) about the ovals and whatnot.
And my South Capitol Street project page explains how this bridge and the interchange project are the first of a multiphase plan to rework much of South Capitol from the Southeast Freeway to the Suitland Park.
UPDATE: There is a new URL for an official web site for the project, newfrederickdouglassbridge.com. You can see the rendering video by scrolling down a touch or clicking on "Gallery." There's a lot of additional drawings, including these two from above, which show the traffic ovals and also do show multi-use paths on both sides of the bridge. See also the siteplan to get your bearings about the new bridge and ovals and 295 interchange.
Also, the project web site says that construction is expected to begin in "winter 2017." 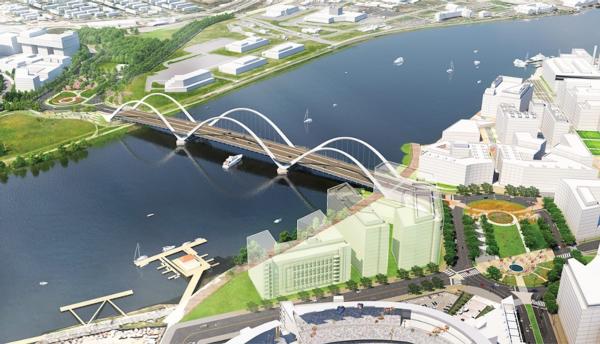 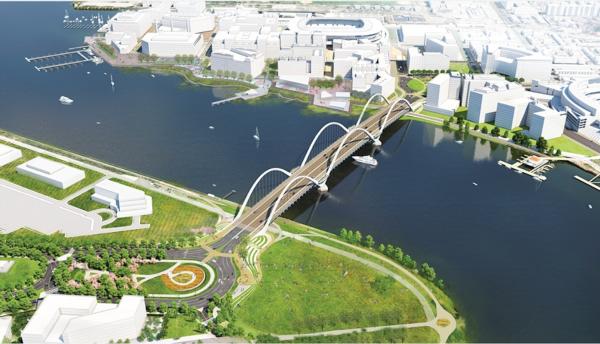