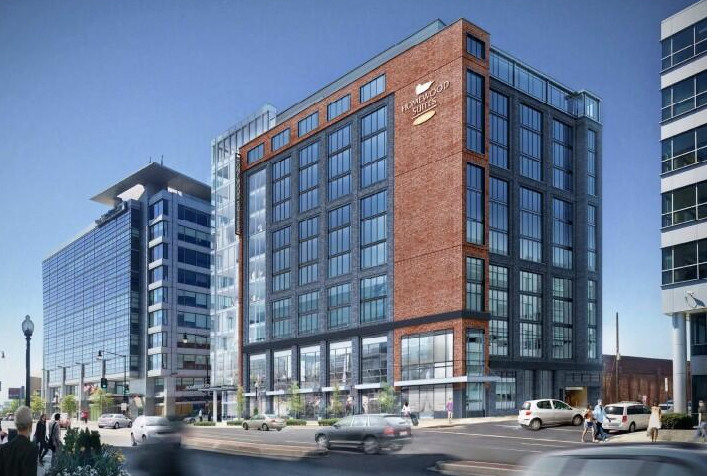 On Monday night, the Zoning Commission voted to approve the design for the proposed Homewood Suites hotel on the northeast corner of Half and M, just across from the Navy Yard-Ballpark Metro station.
According to the Washington Business Journal, "Commissioners were not thrilled with the hotel design, specifically the rooftop trellis, but it wasn't a 'show stopper' for any member of the panel."
The commission also okayed the 175-room hotel's plan to only have 40 parking spaces (instead of the mandated 53), but to get that approval, developer Englewood LLC agreed to various transit-related requirements, including offering full-day Circulator passes to guests, designating a "transportation coordinator," partnering with Bikeshare, and installing an information screen in the lobby showing transit status.
Earlier reporting said that it was hoped that construction could begin later this year or early in 2015, though building permits still need to be secured.
While the Courtyard by Marriott at New Jersey and L has had the Near Southeast hotel market to itself since 2006, this Homewood Suites is not the only new entrant--a168-room Hampton Inn at 1st and N is already under construction, and an additional 170-room hotel is expected in that same block once "Ballpark Square" gets underway.