After a dull and uneventful series in Milwaukee, the Nats are coming back to the neighborhood for a five-day, six-game home stand at Nats Park. It starts Tuesday at 7:05 pm against the Phillies, and I'm just throwing out a guess that there might not be quite the vast flotilla of buses headed down I-95 for this three-game series that we saw a few times last year.
Then, starting Thursday, Aug. 2, there's four games against the Marlins, including a Friday, Aug. 3 single-admission doubleheader to make up the April 22 rainout. One ticket gets you into the 4:05 pm game and the 7:05 pm game, giving you more baseball in one sitting than really should be allowed by law.
And Sunday, Aug. 5 is Michael Morse Bobblehead Day, for the first 15,000 fans through the Center Field Gate.
Jul 30, 2012 8:27 PM
Robbery Under the Freeway on July 25 - Details
Today on the MPD-1D mailing list, police provided some detail on the robbery that happened on at around 10 pm July 25th, originally reported by MPD as having happened in the 100 block of I Street SE. It turns out it was actually on New Jersey Avenue under the freeway, and police gave this capsule: "The complainant reported that while walking at the location he was approached by three individuals, one of who produced a weapon, and robbed of his property. The suspects were last seen running through Garfield Park. The suspects were described as 3 black males in the teens, slim build."
(If you haven't scrolled down the main JDLand page in a while, don't forget about the Crime Reports feed and map, which comes directly from MPD data.)
Jul 30, 2012 1:57 PM
Trash Transfer Building Slowly Heading to the Trash Heap 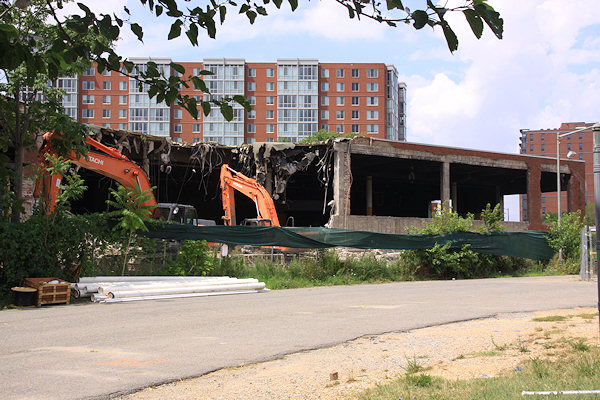 Sending the old trash transfer station building on New Jersey Avenue to the big trash transfer station in the sky that's been almost as anticipated among residents as the departure of the school buses from the Canal Park site a few years back, and action over the past few days seems to indicate that the end is almost upon us.
The glass blocks came out of the large window areas last week, and some big chunks came out of the building's north side this morning, though then the work came to a halt. But even if it's not gone within the next 24 hours, clearly the clock is finally ticking, as you can see in the photo at right (see enlarged version).
If you're already feeling nostalgic for the structure, my photos of the building's interior and exterior taken a few weeks ago could ease your pain.