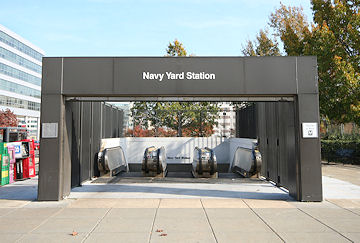 Michael Stevens, the executive director of the Capitol Riverfront Business Improvement District, has sent a letter to the mayor, the city council, the WMATA board and other city officials, formally requesting that the Navy Yard station on Metro's Green Line be renamed " Capitol Riverfront/

" (aka Curly W, for Nationals Park).
With Metro letting it be known this week that any new station names will have to be 19 characters or less thanks to the transit agency's decision to begin enforcing their own naming rules again, the BID's earlier desire to add their name and the Nationals' logo to the existing station name would not be allowed. Therefore, in order to get Capitol Riverfront added, the BID feels that "Navy Yard" can be, well, shipped out to sea.
Stevens' letter says that "the name Navy Yard station has served this area well for approximately 20 years and was very descriptive 20 years ago when the federal government owned the majority of the land up to the metro station." But the letter also says that Navy Yard "no longer accurately describes the neighborhood and destinations served" by the station.
The letter goes on to describe the changing demographics of the area since the station opened in 1991, makes mention of the fact that Capitol Riverfront is "an established office submarket recognized and named by Co-Star," and notes that "the entrance to the Navy Yard is located at 6th St., SE and M St., SE, which is approximately a half mile away and a twelve minute walk from the metro."
In explaining how the name change meets WMATA's stated principle that a new name incorporate "customer input," the letter describes the "coalition of public and private stakeholders [who] conducted a study and provided input that led to the development of the Capitol Riverfront name for the neighborhood," back in 2007.
DC and the other jurisdictions are supposed to come up with any new station names by September in order to make the new June 2012 map that Metro will be preparing to coincide with the plans to realign the Yellow and Blue lines; the Examiner wrote earlier this week about the plans to shorten 11 of the more lengthy station names.
Greater Greater Washington also wrote recently on the plans to shorten names, and in describing the focus groups that WMATA conducted on current and proposed station names, said: "The participants did like two potential station name changes: 'Smithsonian-National Mall' and adding some information about the Nationals to Navy Yard, whether a curly W logo or the words 'Ballpark' or 'Nationals.' They didn't like also adding 'Capitol Riverfront,' the name of the BID."
The Navy Yard was established in 1799; from World War I until 1963, the Navy Yard's acreage included the land south of M and east of 1st, in what then became the Southeast Federal Center and is now The Yards. The neighborhood directly around the Navy Yard has also been known as "Navy Yard," with "the near Southeast" starting to be used in 1960s if the Washington Post's archives are an accurate guide. (I have always avoided the "Navy Yard" moniker for the neighborhood so as not to have to spend every day of my life saying "No, not in the Navy Yard, near the Navy Yard.")