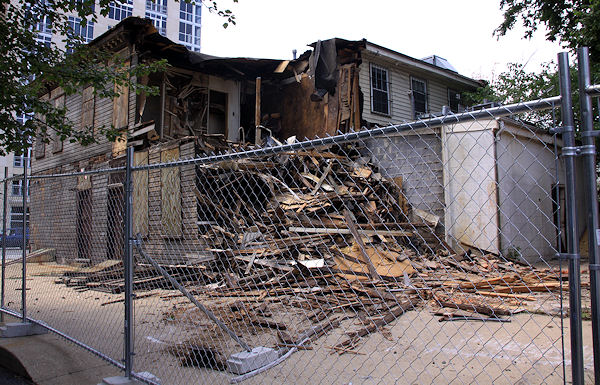 With raze permits for the old structures along 1st Street SE between K and L finally approved in mid-June, the days were truly numbered for the Market Deli and its neighbors, and today the demolition got underway, with most of the rear section of the Deli's structure knocked in. Fences are up all around the 1st Street structures, which are all owned by Akridge, and with this initial wrecking underway I imagine it won't be long until the five buildings are added to my Demolished Buildings Gallery, as entries 161 through 165.
There's a few more images here, showing that the demolition isn't quite so obvious from 1st Street (yet). Also, hopefully the folks who have been tending to the cats living in the abandoned building can report in as to their fate. (I heard a rumor that some kittens were removed today, but would defer to an update from anyone with more knowledge. UPDATE: In the comments of another post, reader jenniferp says that five very young kittens were indeed captured this morning, but there are several more still on the loose.) And, if you haven't been following along on the tale of the Market Deli for the past few years, here's some enlightenment. 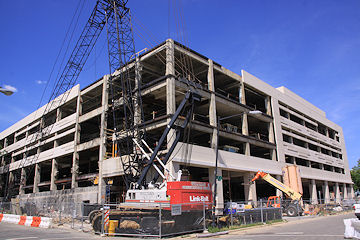 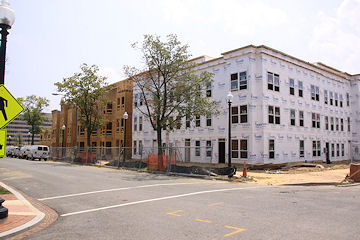 And, because it would have been silly to wander down there in the ghastly heat and humidity and walk past a whole lot of spots where I needed to take updated photos, you can see the latest progress at 225 Virginia (aka 200 I Street) and the second phase of Capitol Quarter, where framing is being completed on the last portion of its first block, along Fourth Street.