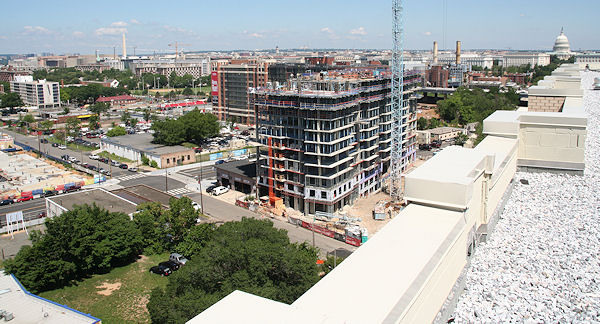 Are you stuck inside, maybe not even near a window (like me), on this gorgeous summer day? Then take a few minutes to run through this new batch of photos from up high at the Courtyard by Marriott at New Jersey and L, SE, showing views east across the Cappers and west across New Jersey Avenue (both down toward the ballpark and up toward the Capitol), displayed alongside the 2006 "befores" from the same angles. If somehow the differences between "old" and "new" Near Southeast haven't quite been apparent to you before now, this batch of photos should finally take care of it--remember, it's a mere 27 months between the oldest and newest shots.
And, if you've got some time, you should really look at the complete lineup of images from these locations, taken approximately every three months since early 2007, to watch the progression of old buildings disappearing and new ones popping up.
As a special added bonus, you can also see proof that the USDOT's vaunted green roof is indeed green.
Jun 24, 2008 10:03 AM
A.M. Mish-Mash (With Hill East and Southwest Items)
* Outside the Boundaries I: On June 30 at 6:30 pm, the Zoning Commission is having a hearing on the creation of a new zoning overlay district for Hill East. Quoting: "The proposed HE District is part of the implementation of the Reservation 13 Hill East Waterfront Master Plan, which received final approval from the Council of the District of Columbia on October 15, 2002. The vision for Reservation 13 redevelopment is to be a mixed-use, mixed-income, vibrant city neighborhood with residences, retail, office, health care, and institutional uses. The redevelopment will extend the Hill East neighborhood street grid, and extend Massachusetts Avenue to end in a ceremonial circle at the waterfront."
* Outside the Boundaries II: The July Southwester (PDF, 7 MB) reports that the Marina Towers rehab is now going to result in apartments rather than condos. There's also blurbs on stadium parking and traffic issues as they impact Southwest, and other items of interest to folks on the west side of South Capitol.
* For those of you willing to hunt for the hard copies, there's also a coupon in the Southwester for $3 off any $10 or higher ticket at the ballpark on "Neighborhood Nights" (i.e., every Friday night home game). Then you can watch the fireworks from inside the ballpark for a change.
* Want to join the fun and run for a seat on ANC 6D? Petitions to get on the ballot can be picked up starting Aug. 6 at the DC Board of Elections.
Jun 24, 2008 12:45 AM
Late Night Roundup, and Some Wondering
* Sorry I missed this until now: the Post reported that on Saturday evening "[a] motorcycle was headed west on M Street SE about 6:30 p.m. when a car traveling south on Seventh Street began to turn onto M Street. The car and motorcycle collided, and the motorcyclist was fatally injured, police said."
* The Post's Grounds Crew blog has only now discovered that there's a Five Guys just around the corner from the Navy Yard subway station east entrance (on Second Street north of M, if you haven't discovered it yet, either).
* The PSA 105 mailing list announced yesterday that they are having a "Summer of Safety Ice Cream Social" at Capitol Hill Tower "to show unity with the citizens of Capitol Hill and the Metropolitan Police Department by sharing some nice and cool ice cream while sharing information." The message said that the social is from 2 to 5 pm on June 25. A Wednesday afternoon? I wrote asking for confirmation, but haven't heard back. Anyone out there with the {ahem} scoop?
* Washington City Paper and WBJ both note layoffs at MacFarlane Partners through the prism of how it might affect the drive to put a soccer stadium at Poplar Point; I see the news and wonder about the capital that MacFarlane is supposed to be investing in both The Yards and Monument Realty's Half Street.
* Is the report in the July Southwester that Monument Realty and the Corcoran Gallery have received zoning approval to delay to 2015 (from 2011) their planned redevelopment of the the Randall School site at Half and I SW something to wonder about, too?
* And, while I'm heading off the reservation with all of this wondering, did anyone else read this Post story on fuel prices causing problems for school districts' transportation budgets and ponder whether buses would have to drive farther to and from their daily routes from a parking lot at DC Village as compared to one at Second and M, SE?