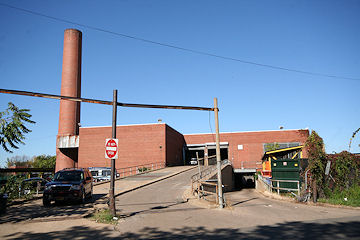 Just arrived this morning is a copy of the raze permit application for 900 New Jersey Avenue SE, far better known as the trash transfer site, where the city's Department of Public Works has operated out of for many years. The block is part of the footprint of the Capper/Carrollsburg redevelopment, and is slated to eventually become a 320-ish-unit mixed-income apartment building.
Its demolition will allow for the construction of I Street between 2nd and New Jersey, which also paves the way for William C. Smith to be able to start on its planned residential project just to the north at 800 New Jersey.
The DC Housing Authority will be handling the demolition, which won't happen until a new DPW home is constructed in Northeast, though they are hoping that the move happens before the leaves start to fall. And then there will need to be environmental abatements on the site, which has had trash-related operations on it for a long long time.
And apparently ANC 6D07 commissioner David Garber won't be trying to landmark the smokestack after all. (Read this comments thread for the background on that.)