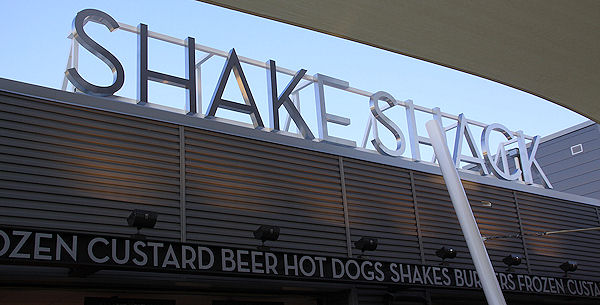 On Monday night the Nationals unveiled for an invitation crowd the four new concession options brought to Nationals Park by the Union Square Hospitality Group. Shake Shack (which has already taken Dupont Circle by storm), El Verano Taqueria, Blue Smoke Barbecue, and Box Frites are side-by-side along the Miller Lite Scoreboard Walk in Center Field, and will be open 2 1/2 hours before every game. (There will also be $5 "happy hour" beer specials on the Scoreboard Walk, starting 2 1/2 hours before every game for the rest of the season.)
The area behind the scoreboard has also been "refreshed," with new furniture, plants, trees, herbs (really!), and synthetic turf to give a "backyard" feel. There are also 14 "shade sails" now erected over the area to help keep fans waiting in line for the new eats from falling over in the heat; the sails are supposed to reduce ambient temps by up to 20 degrees, and also provide UV ray protection of up to nearly 94 percent. 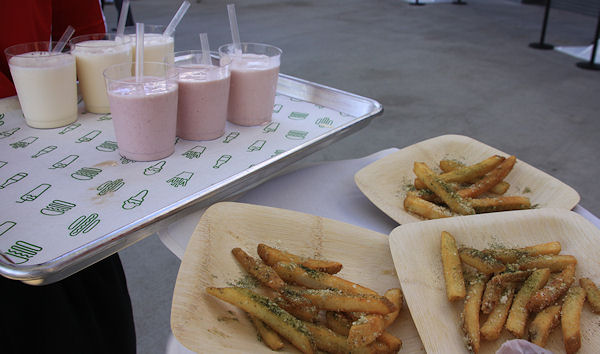 The Nationals are hoping that this revamped spot becomes an "iconic" area at the ballpark, with COO Andy Feffer explaining that the stadium already has "cool clubs," but they are private and not open to everyone as these will be. As for whether they will be able to handle what could be quite a crush of hungry foodie fans, Feffer said "We shall see," while noting that since the USHG folks have existing operations at Citi Field in New York, "if anybody's prepared, these guys are."
And, is there a chance that these four stands could ever open to the public on non-gamedays? Feffer says they've talked about it, and that it's a possibility down the road, when the area's worker-and-resident population expands further.
I took a slew of pictures of the food and signage (two of my favorite photo subjects, even surpassing shots of buildings!). The eateries will open to fans on Tuesday at 4:30, before the 7:05 Nats-Cardinals game. (As always, 400 $5 tickets are available at the box office on game day.) The photo gallery also includes photos of the menus if the suspense is too much to bear.
UPDATE: The Post's Dan Steinberg has more on the new offerings.