Word is hitting the streets that the public meeting for the Virginia Avenue Tunnel's Final Environmental Impact Statement is scheduled for July 1, from 6:30 pm to 8:00 pm at the Capitol Skyline Hotel. Presumably the actual document will be available before then...?
Jun 10, 2014 11:12 AM
Tuesday Tidbits: On the Water Front 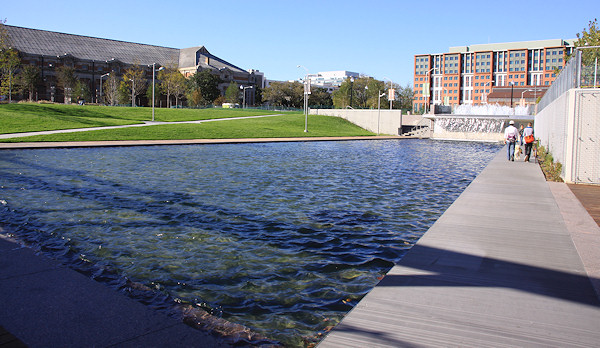 * FILLING WATER: After the flooding a few weeks ago took out the pumps, the Yards Park folks are now reporting that the basin is starting to be re-filled. Though it's still in a testing phase, officials are optimistic that the wait is almost over and the basin and fountains should be back in operation soon.
* MANAGING WATER: The EPA has released the case study about Canal Park entitled Integrating Stormwater Management and Public Amenities through a Public-Private Partnership, saying that the park "exemplifies how a public-private partnership can be used to create a public amenity that enhances the community and provides environmental benefits."
* FRONTING WATER: I came *thisclose* to posting a link that just popped up in my RSS reader about how the developers of the Florida Rock site just said that they expect to begin construction on Phase I of RiverFront on the Anacostia in "mid-2014"--but then I thought to look at the date on the release, and it was May 7. So I guess could still technically be considered news, but we're now reaching "mid-2014" with no sign of movement....
* CROSSING WATER: A reminder that tonight at 6:30 is your chance to meet the four finalists in the Bridge Park design competition. The event is at 1801 Mississippi Ave., SE.
And in the No Water Connection At All Department:
* COMMUNITY CENTER: Tomorrow night, Wednesday, June 11, is the public meeting on the results of the Capper Community Center survey.
* VAN NESS: Greater Greater Education looks at the drive to reopen Van Ness Elementary School.
(and no, the headline isn't a typo)