3 Blog Posts
May 27, 2008 10:25 PM
Wednesday Lunchtime Concert Series Launches
Starting Wednesday May 28, the Capitol Riverfront BID and US DOT developer JBG are launching a 10-week lunchtime concert series, to be held every Wednesday at noon on the Southwest Plaza behind DOT at New Jersey and Tingey. Quoting from the press release: "Capitol Riverfront Concerts is a ten week summer concert series with lively and diverse musical artists, performing everything from original pop to Latin Jazz, R&B, bluegrass, Caribbean and more. Bring your lunch or enjoy a special outdoor grill menu provided by the U.S. DOT cafeteria."
Folks desperate for outdoor recreation space in the neighborhood might note this line from the release: "The concerts are part of a growing number of programs that you will see in the Capitol Riverfront as several new parks begin to open next spring 2009." (There could indeed be three parks opening in some capacity next year, if previously announced [or hinted at] timelines hold: Canal Park, the waterfront park at The Yards, and Diamond Teague Park.)
Here's the flyer with the lineup of performers, and a map if you can't quite figure out where the plaza is. I've also added the schedule of performances to my own Near Southeast Upcoming Events Calendar.
May 27, 2008 2:03 PM
This Week in Zoning: 250 M, Yards Park
There's two Near Southeast projects with hearings in front of the Zoning Commission this week:
* On Wednesday (5/28) the ZC will hear the request to extend the height of the office building planned for 250 M Street. I've written about this here, and you can read the Office of Planning's final report for much more detail on the request (and see the latest design). OP recommends approval of what is technically a modification to the Capper/Carrollsburg second-stage PUD (yes, this office building is part of the Capper redevelopment). After initially refusing to vote on the plan because of a lack of community benefits, ANC 6D voted 3-3 on it at its May meeting, which means there will be no support from the ANC. (I wasn't at this meeting, so I can't give you the specifics of what the developer offered to the ANC, or why the resolution didn't pass.) It's possible that 250 M will begin construction this year, but there's no confirmation of that.
* The next night (Thursday 5/29) the ZC will undertake a Southeast Federal Center Zoning Overlay District Review for the first-phase plans of the 5.5-acre waterfront park at The Yards. This design was approved by the National Capital Planning Commission back in February (with some suggestions for refining the pedestrian bridge that is one of the focal points of the design). The Office of Planning report for Thursday's hearing gives a lot of good detail on the plans for the park, as does my original entry from when the design was unveiled. OP supports the design for the park, while also hoping for refinements to the bridge and noting that there should be additional bike racks. You can all sorts of cool renderings of the plans on my Yards Park project page. The first phase of the park is expected to be finished by the end of 2009; subsequent phases, which will include piers and retail pavilions, will come later.
May 27, 2008 12:10 AM
New Overhead Vantage Points: 70 and 100 I 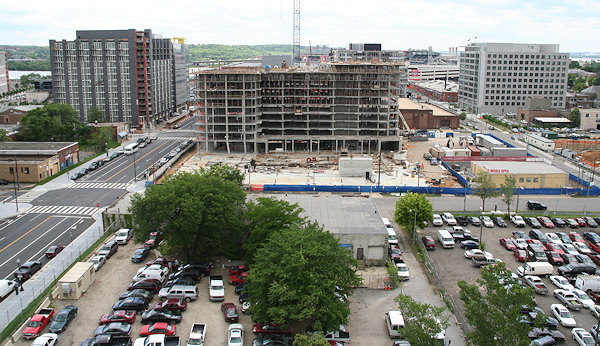 Watching from ground level as new buildings pop up is all well and good--but when they are completed, it also means a new vantage point for overhead views of the neighborhood (as long as I can convince the owners to indulge a pesky camera-toting neighborhood blogger). So, thanks to the folks at JPI, I'm now able to add 70 I and 100 I to the Overhead Photo Gallery, joining existing perches on top of 1000 New Jersey, 20 M, and various spots at the ballpark. Even though it wasn't a brilliantly sunny day when I visited, I still got some good photos of the current state of Near Southeast (such as 100 I's southward view seen above, showing the renovated First Street, Onyx, 100 M, Velocity, Nationals Park, and 20 M). In these new 70 I and 100 I overhead galleries, you'll also see 909 New Jersey, the hole being dug for 1015 Half, and even some views east toward 225 Virginia and west toward Southwest. Enjoy. (And, if you want to see the photos I took *inside* 70 and 100 I this week, check out the project page.)