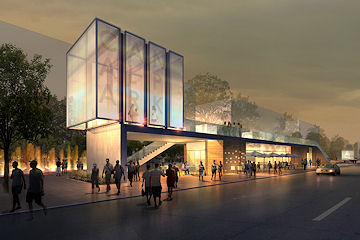 * Canal Park: Chris Vanarsdale of the Canal Park Development Association gave an update on construction, the bottom line of which has not changed from what's been mentioned the past few months, that because of unexpected issues, the park's opening has been delayed until November. Unmapped utilities that required a redesign of the stormwater management system have been a big stumbling block, but Vanarsdale also mentioned the soil-related difficulties when building on the site of an old canal. Construction is now 60 percent complete, and the work on the pavilion is almost done. Here are the presentation slides, and you can also check out the official web site for more details (along with my project page). Oh, and they're thinking about offering Zamboni driving lessons!
* Community Center: The DC Housing Authority has filed a request with the Zoning Commission for an extension for construction of the planned Capper Community Center, which already received one extension back in 2010 that 6D supported. DCHA has apparently requested that the Zoning Commission act within 30 days on the request, news of which the ANC received on Monday. So the commissioners voted unanimously to send a letter urging postponement of the zoning case so that the ANC can address the request and form a response with a vote at next month's meeting. Commissioners Litsky and McBee also both commented that the project shouldn't be getting another extension.
UPDATE: Here is the letter sent on behalf of DCHA to the Zoning Commission asking for the extension: it would be for two years, requiring building permits by July 1, 2014 and construction underway by July 1, 2015.
* CSX/Virginia Avenue Tunnel: The commissioners voted 6-0-1 to send this letter to the appropriate parties laying out the ANC's opinion on the plans to reconfigure the Virginia Avenue Tunnel. After listing the various ways that the proposed construction "would put people, homes, businesses, and fragile historic resources at risk," the letter states: "[W]e strongly believe that the best options for our community are for CSX to either leave the Virginia Avenue Tunnel in its current state (Concept 1) -- with the suggestion that if this option were chosen that the tunnel would be fully maintained for the safety of both the trains below and the communities above, or to reroute additional train traffic outside the District of Columbia [...] instead of in an expanded Virginia Avenue Tunnel." But, if the construction does occur, "it is absolutely imperative that the health and safety of our many residents, the economic and physical well-being of our businesses, parks, religious institutions, homes, and historic buildings, and the north-south access for all existing modes of transportation be preserved and enhanced." A number of Capitol Quarter residents in attendance also spoke in support of the ANC's support. The next public meeting on the plans for the tunnel will be May 21 at 6:30 pm at Nats Park.
One more recap post to go, probably tomorrow.
May 15, 2012 9:49 AM
ANC 6D Recap 1: Water Pylons, and Parking
It was a busy ANC 6D meeting on Monday night for Near Southeast-related issues, so I'm going to put it all in a series of posts: 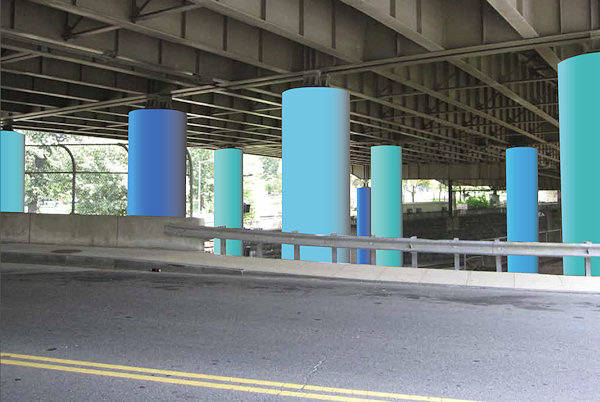 * New Jersey Avenue Underpass Art: The Capitol Riverfront BID gave an update on the "Water Pylons" art installation, which is now moving forward after being "dormant" for about a year. This is the project partially funded by a grant from the DC Commission on Arts and Humanities that will paint and light the pylons holding up the Southeast Freeway in a "modern representation of water that announces New Jersey Avenue, SE as a gateway to the Capitol Riverfront community." The reflective blue paint should go up in July, followed by light fixtures in August, and the installation should be dedicated in September, which will be right around the time that DCCAH moves into its new nearby digs at 225 Virginia/200 I. Passers-by may note that new fences and LED overhead lighting have already been installed along New Jersey as part of the transformation of the underpass. The BID's presentation to the ANC, with more information about the project, is here.
* Parking Parking Parking: There was a discussion about issues with game-day parking in the neighborhood, specifically the prohibition of parking along K and L streets, as well as other restrictions that have made residents unhappy. Damon Harvey of DDOT says that the agency is "reassessing" the current configuration, to figure out how to provide better access to residents while not allowing stadium-goers to then hog all the parking. He expects that changes will be announced in a month or so that will allow for "greater residential protection during games." One other non-game day change for residents has already gone into effect: meters are now turned off at 6:30 pm (but still 10 pm on game days).
However, those who came to the meeting hoping to hear about changes in the Residential Parking Permit system that would allow residents in the high-rise buildings west of Canal Park to park on the street throughout Ward 6 were disappointed, as DDOT continues to hold that large residential buildings in mixed-use neighborhoods will not qualify for RPP. (Harvey used the Ellington on U Street as a specific example of this being the case elsewhere in the city, but there are more buildings in this situation than just that one and the Near Southeast ones.)
Also, in somewhat related news the ANC unanimously passed a resolution protesting the plan in the mayor's new budget to redirect most performance parking proceeds to other areas, such as Metro, rather than their being used as originally intended, to fund non-automotive transportation improvements in the neighborhood.