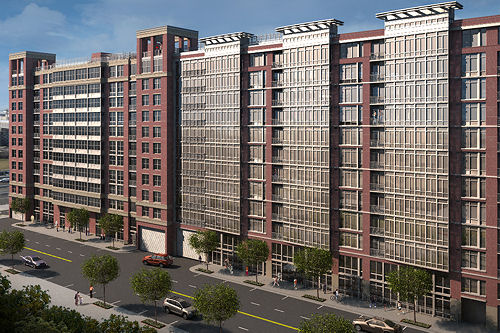 Word has just arrived that there's a "Preview Grand Opening" this weekend for JPI's first two "Capitol Yards" apartment buildings, the brick siblings at 70 and 100 I Street (officially known as Jefferson and Axiom at Capitol Yards). There's apparently now a leasing trailer on I between Half and South Capitol (next to Wendy's perhaps? I haven't been by in a few days), and tours of the new buildings will start there, with the preview running from 10 am to 6 pm on Saturday and Sunday (the 17th and 18th). The two buildings will have almost 700 rental units available, and should have some pretty amazing views of the neighborhood and the Capitol dome (and the freeway!). (The building permits for rooftop pools on both buildings just came through within the past few days.) The official web site is at capitolyardsdc.com; you can see the history of the project (which broke ground in fall 2006) on my 70/100 I project page. These are the first residential units to open in Near Southeast since Capitol Hill Tower was completed in spring 2006, and they are the first rentals. It's expected that Onyx on First (now apartments, at least last I heard) will be opening later this year as well, adding another 266 rental units to the neighborhood.
May 15, 2008 10:30 AM
Post Column; Smattering of Recent Ballpark Links
* My Ballpark and Beyond column in today's District Extra of the Post includes a series of items I've posted here over the past few weeks, including the signing of sales contracts at Capitol Quarter, the return of the DOT Farmers Market, work starting/not starting on the Pattern Shop Lofts at the Yards and 1345 South Capitol, and the plans Monument Realty has for 50 M Street. (The column's just going to run every other week from now on, which will be festive given that the amount of news out of the neighborhood has dropped by about 70 percent since the ballpark opened; so my desperation for content will be even greater than before).
* Tim Lemke reports that the D.C. Building Industry Association is presenting today "a 2008 Building Achievement Award to the ballpark project team, in recognition of the accomplishment of building the stadium in under two years while facing significant budget pressure."
* A native of Chicagoland has good things to say about the ballpark, especially its "green" aspects.
* It took a while, but here's some press coverage of the May 6 high school baseball game at the ballpark between B-CC and Whitman.
* Keith Olbermann's video tours broadcast during the past two weeks of the under-construction Yankees and Mets ballparks have made me wistful.