2 Blog Posts
May 10, 2011 10:26 PM
Late Tuesday Tidbits: Ribbon to Be Cut, Ground to Be Broken
Just a few items to catch up on, though they've already been tweeted (Twitter really is the best friend of a lazy blogger): 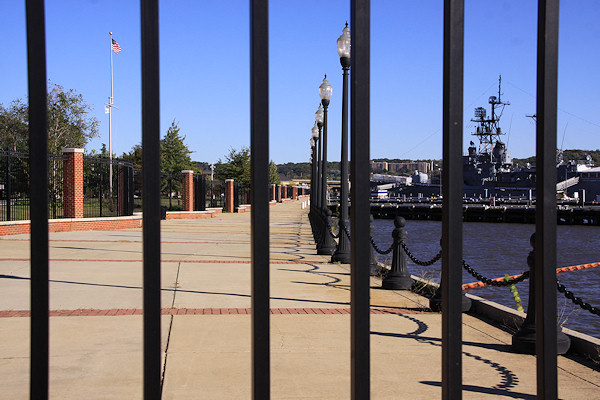 * The Navy Yard is having a ceremonial ribbon-cutting for its portion of the Anacostia Riverwalk Trail on Wednesday morning (May 11) at 11 am. It was on April 1 that the Navy opened this long-completed but long closed off stretch, which runs from just east of the 11th Street Bridges to the Yards Park, though it is only open from 8 am to 5 pm Monday through Friday (excluding holidays) and is subject to closure if the Navy deems it necessary. (I finally took my first walk on it from the Yards Park and back recently, though I did it close to closing time and was imagining the hilarity that would have ensued if I had gotten locked in.) This ceremony also dovetails with the start of the BID's Wednesday Lunchtime Concert Series at the park, at 11:30.
* Will from just across the way reports that Camden is having a ceremonial groundbreaking on May 17 for 1345 South Capitol Street, the 276-unit apartment building with ground-floor retail just across from Nationals Park that's been on hold since 2008. Though it's on the Southwest side of the DMZ and therefore in Will's territory (as spelled out in our meticulously negotiated Neighboring Blogger Treaty), I probably won't be able to completely prevent myself from taking photos of the progress from time to time, especially since I have a full set of "befores." But I'll be leaving the bulk of the coverage work to Will.
* The old fogies who were around in the 2004 to 2006 era might remember that a big part of getting the city council to approve the deal to fund and build Nationals Park was the "Community Benefits Fund," which would receive additional ballpark tax money and distribute it to libraries, schools, and other neighborhood developments. But Mike DeBonis reports that Mayor Gray's FY12 budget has a change that essentially makes the mayor and council decide every year whether the fund's money goes to the neighborhood projects or to "other spending priorities" in the city. Citizen groups are unhappy and council members are, too, DeBonis says.
May 10, 2011 2:48 PM
Redistricting Update: ANC Resolution, Mendelson Meeting
The pushback by Near Southeast residents against the idea of moving the neighborhood out of Ward 6 and into Ward 8 continues, with some evidence that their calls, e-mails, and petitions are having an effect:
At Monday night's ANC 6D meeting, two of the three council members that make up the redistricting committee came to speak to residents. Phil Mendelson (who said that he invited himself to the meeting) and committee chair Michael A. Brown gave a short presentation on how redistricting works, and then spent about 45 minutes answering audience questions. Neither of them took a position on whether Near Southeast or Southwest should be moved, and both also took pains to note that there is no official proposal yet, and that it is Marion Barry who is floating the idea. (They also indicated that Marion Barry's argument about how the move would improve the economic standing of Ward 8 wasn't quite resonating with either of them.) The initial map of the redrawn ward boundary lines should be released by the committee later this month, either on or after May 25 (when the FY12 budget stuff is wrapped up).
After the council members finished, the ANC quickly voted unanimously to support the resolution to keep all of 6D in Ward 6. Near Southeast commissioner David Garber has been tweeting his visit to the Wilson Building today to deliver the resolution and a 200-plus-signature petition, saying that Jim Graham told him that Near Southeast is "not in play" and that Mary Cheh's office assured him that "she supports keeping Near Southeast in Ward 6." (Cheh had made this known last week, when she told Tommy Wells to make the calls from concerned Near Southeast residents stop.)
Residents are continuing to press the council, with reports on the Near Southeast mailing list of multiple visits to council members' offices. And another meeting for residents on the subject has now been scheduled by Capitol Quarter resident and meeting-organizer-dynamo Bruce DarConte, this time with Phil Mendelson, on Monday, May 16, at 6:30 pm at the Capper Seniors building at 900 5th St. SE.
(People interested in this battle might also want to read Lydia DePillis's rumination on the optics of the fight, "So Much for One City.")
UPDATE, 5/12: Bruce DarConte has passed along that Jack Evans, the third member of the redistricting committee, has confirmed his attendance at the May 16 meeting at Capper Seniors.