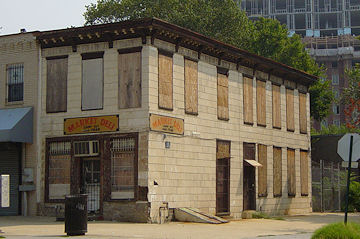 The staff recommendation to the Historic Preservation Review Board on the application for historic landmark status for the Market Deli has just been posted, and the gist is right at the top: "After careful consideration, staff recommends that the Historic Preservation Review Board not designate the property at 1024 1st Street, SE (Square 740, Lot 802) nor that it forward the application to the National Register of Historic Places with a recommendation for listing."
Recognizing that the argument that as a "building type becomes scarcer in a neighborhood, it takes on the role of representing the whole class of similar buildings that has been lost" is not a "frivolous" one, the staff report nonetheless says that "to accept such an argument absolutely or uncritically would set an unacceptably low bar for significance and thus, designation." It goes on to discuss the history and historical context of the building, as well as the building type, not finding that the structure rises to the level of landmarking in any of the areas.
It then summarizes: "The Board has previously rejected nominations for properties that have been merely typical of their neighborhoods, taking the position that, by definition, these do not rise to the level of landmarks worthy of notoriety. In this case, the nomination and the resource itself do not demonstrate that they are sufficiently associated with historical periods or patterns of growth that have contributed significantly to the development of the District."
You can read my initial entry on the landmark nomination for more background; it was championed by ANC 6D07 commissioner David Garber, and supported by ANC 6D, but sparked a pretty vociferous backlash from some neighbors, as can be seen in the comments on those entries. (I hope to have the Memorandum in Opposition prepared by some of these neighbors soon.)
The hearing by the board itself on the landmark designation takes place Thursday, April 28, so this is not yet a done deal; this is merely the staff's recommendation. There will be plenty of people testifying on both sides, I imagine. (At least it's first up on the agenda, at 10 am.)
(PS: I'm not sure that the staff document as posted is complete; I'm only seeing two pages, and it seems to not really "conclude." Will see if a revised version pops up.)
UPDATE: Here is the very detailed Memorandum in Opposition submitted by a group of neighbors; unfortunately there's no credit line as to who submitted it, and the names of the undersigned aren't included.
Apr 22, 2011 9:33 AM
Outdoor Movie Lineup; FreedomFest; Harry's Grand Opening
A couple of event tidbits:
* The BID has announced the lineup for this year's "Best of the Oscars" summer outdoor movie series, running on Thursdays from May 26 through July 28. The movies, which are free and open to the public, will start at 8:45 pm (or sundown) at Tingey Plaza, which is directly behind USDOT at the corner of New Jersey and Tingey. There will be food trucks, popcorn, cotton candy, and Micha's sorbet.
* The National FreedomFest, a two-day music and arts festival, is coming to the Yards Park on July 3 and 4. They are advertising "over 40 bands and DJs" on five stages, along with food and craft vendors (and yes, beer, since the event is co-sponsored by Budweiser). Tickets are $19.99 per day or $29.99 for a two-day ticket, or if you're feeling special you can get special VIP and/or "Taste of Freedom" tickets, which get you access to VIP areas, free beer, private bathrooms (!), and more, but which are a bit pricier.
* And, on a somewhat smaller scale (but sooner!), Harry's Reserve has passed along word of its official Grand Opening, scheduled for Saturday, April 30, from 4 to 7 pm. There will be appetizers, wine tastings, and "high-end whiskey tastings" (wheee!). Savita also tells me that they've added a selection of cheeses, patés, and salamis to their lineup, as well expanding their lineup of spirits. Harry's also does wine tastings every Friday and Saturday from 4 to 7 pm.
* I should also mention Marcatus, the "creative art market" being held on the first Sunday of every month at the Yards Park. It's from 11 am to 6 pm, and offers live music and food in addition to artists displaying their works. Next one is May 1.
* And, just as I posted this, the BID sent out the flyer on the summer Wednesday lunchtime concerts, running from May 11 to August 17 from 11:30 am to 1 pm in the Yards Park. This is in addition to the Friday evening concert series at the park that begins on May 13.