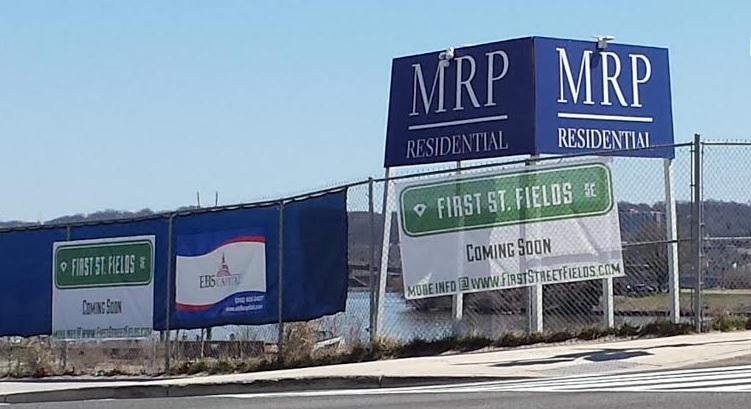 Right as I was posting about all the fence signage in bloom, another batch of new banners appeared, at the Florida Rock site on Potomac Avenue at South Capitol Street.
The banners announce First Street Fields, and point to a placeholder website that says the "Social Sports Venue | Events Venue | Private Rentals | Beach Bar" will arrive in "Late Spring 2014."
The Hill Rag reports that the plan is for a "unique-to-Washington sports facility featuring playing fields for sports like bocce and whiffle ball, beach volleyball and kick ball." There would also be food trucks, pop-up "restaurants," farmers markets, and public and private field days.
And if this all sounds a bit familiar, that's because a similar proposal last year didn't quite make it through the process. Which is perhaps why the developers emphasized to ANC 6D during a presentation in March that it will be a "safe place to come," according to the Hill Rag, and that they "are looking at such issues as safety, medical issues, and crowd control[.]" The developers said that the sound would be carefully controlled with “integrated speaker management.”
The commission subsequently voted 4-2 to support the concept, once a settlement agreement is hashed out that covers issues like closing times, noise mitigation, and crowd capacity.
The Alcohol Beverage Control Board is having a fact-finding hearing on the venture tomorrow (Wednesday, April 9).
(I do wonder how that decontamination is going....)