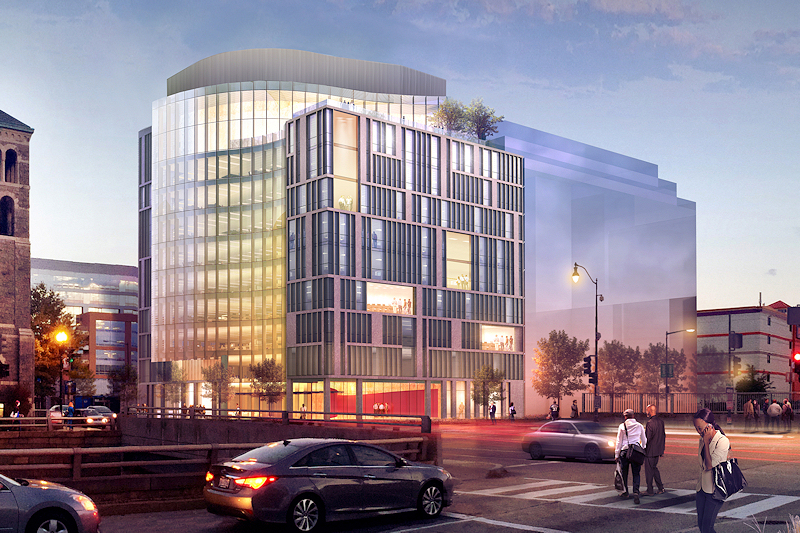 It is being announced today that the National Association of Broadcasters will be moving to the neighborhood, the "culmination of a rigorous search for a location with easier access to Capitol Hill that will allow NAB to improve its advocacy efforts."
Their destination is Monument Realty's planned project on the southeast corner of South Capitol and M streets, on the old Domino's spot.
I wrote about this site a few weeks ago when Monument went before ANC 6D to give a heads up on their plans to build both a 120,000-square-foot office building and a 175ish-unit residential building there, and that they already had a "user" (not a tenant) that they "felt pretty good about."
And now we know why the word "user" was chosen: upon the completion of the new headquarters (expected to be in the fall of 2018), NAB will be buying the building.
"Among the features in the new 10-story building will be a curved facade facing M Street, a rooftop terrace with a view of the Capitol, along with a 100-seat theater. Both the rooftop terrace and theater will be used for receptions and special events."
There is also a quote from Gordon Smith, the president and CEO of NAB, that this new building "will be a showcase venue for radio and television stations across America and will send a strong message to public policymakers on the vibrant future of local broadcasting."
Look for this revised project to pop up in front of the zoning commission for a Capitol Gateway Overlay Review soon. The announcement says that it's expected that construction will begin in the spring of 2016.
This news has also brought about an update of my Ballpark District 2.0 project map.
UPDATE: Monument Realty has passed along the above rendering of the NAB portion of the project--with a ghostly placeholder for where they are proposing an additional 180,000-square-foot residential building, which the comapny says will be built at the same time as the NAB HQ. The NAB building was designed by HOK; the residential building is being designed by Gensler.
Apr 6, 2015 2:19 PM
Nationals Park Awarded 2018 MLB All-Star Game 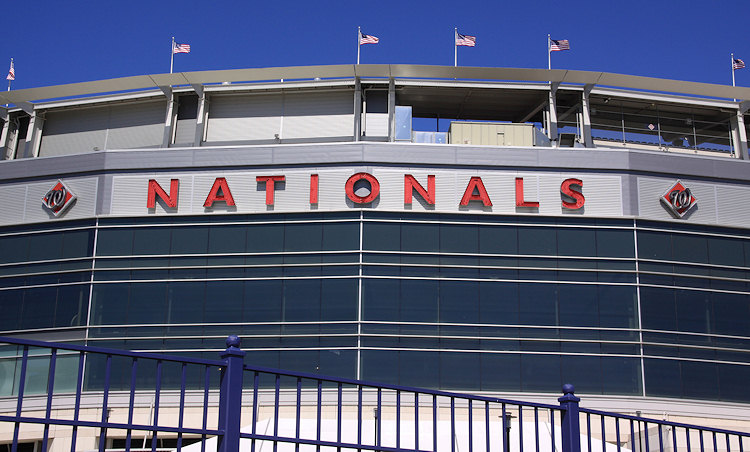 It's a question that's been asked since before Nationals Park even opened: when would it get the Major League Baseball All-Star Game, the now-standard feather in the cap of all new ballparks?
And today brings the answer, with the official announcement by new Commissioner Rob Manfred that 2018 will indeed be the year, as has been rumored for months now
That will dovetail nicely with what I hope will be a nice slew of celebrations of the stadium's 10th birthday that year. (And, for the historically minded, this will be the first All-Star Game in DC since 1962. UPDATE: Make that since 1969. I'm an idjit with poor reading comprehension.)
As for whether by July 2018 there will be more in the block north of the ballpark than just shipping containers and holes in the ground, I can point you to my new Ballpark District 2.0 map, giving the rundown of the latest plans along Half Street and nearby. Hint: somewhere near the middle of the 2016 season will be a good point to assume that whatever projects are started will be completed by July 2018.
It's going to be a fun three years watching this new little deadline become a focus and target of so many projects and plans in the neighborhood....
And hopefully with this good news we can now dispense with "#DCisReady." Because not everything in life needs to be accompanied by a hashtag.