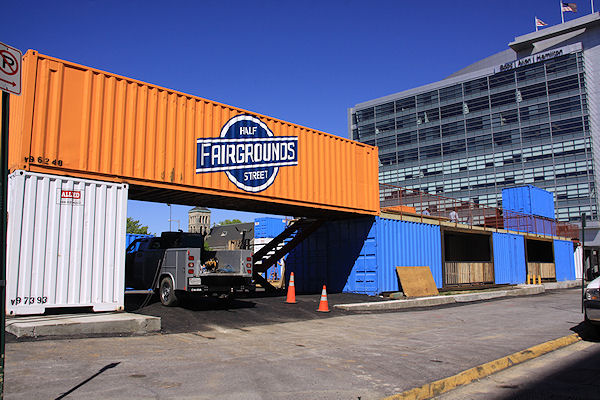 The shipping container market known as Fairgrounds is having its soft opening today in concert with the 3:05 pm Nats-Red Sox exhibition game, with food trucks available for not only for Nats fans but for residents and office workers, from 11 am to 8 pm at Half and M streets, SE. Red Hook Lobster Pound, DC Empanadas, Curbside Cupcakes, Tasty Kabob, and Big Cheese will all be on site.
The "official" opening is planned for April 12, the day of the Nats home opener. I'm guessing that's when the market will actually open.
UPDATE: I visited the site about an hour ago, and they were still working hard, and the food trucks weren't on site yet. It looks like they'll open up the interior up at the Das Bullpen end of the street, but as I predicted, this is really just a chance to sell some food and drinks. The market portion of the project isn't anywhere in evidence yet.
But at least I took a bunch of photos of the perimeter for you to peek at!