4 Blog Posts
Apr 3, 2009 4:57 PM
School Buses Gone?
Numerous reports are coming in that the school buses at Canal Park are gone--as long as there's not some all-fleet field trip that will bring them back later this evening, could this really be the end?
If so, I shall be down there first thing tomorrow to get pictures of the *empty* lots.
I hear that the plan is to bring down the fences and clear and re-sod the blocks to at least have some open space while work continues on a new design.
Post updates in the comments.
Apr 3, 2009 4:03 PM
Photos of No-Bus-Garage; Teague Dock Status

As already mentioned, the old WMATA Southeastern Bus Garage at Half and M streets bit the dust this week, and when the sun unexpectedly peeked out at noontime, I had to go get the shots. You can see the basic views on my Akridge Half Street page, or you can check out the Photo Archive's Half and M and Van and M offerings.
I also took some updated photos (though not complete sets) along N Street, at Half, Van, and Cushing, if you'd like to be reminded before heading to the stadium this season of what the area just north of the ballpark looked like only a few short years ago. (And don't miss today's photos from inside the park.)

I also peeked in down at Diamond Teague Park, where signs of progress are visible (there's now concrete poured in slabs between the shore and the pumphouse), but will the docks be ready "by Opening Day" as has been touted? The dry-land parts of the park are expected to be completed in mid-Summer.
Apr 3, 2009 2:52 PM
What's New at the Ballpark for 2009 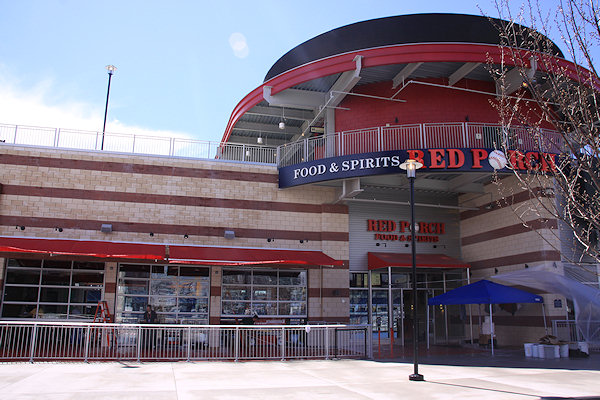 The Nationals invited the media (and a few others) in today to show the changes at the ballpark for this year, in advance of tomorrow's exhibition against the Orioles. This press release gives plenty of specifics, and there will no doubt be stories by most media outlets, so I decided to focus on taking pictures--I've thrown them together in a What's New at the Ballpark quick gallery, while I try to decide how to incorporate them into my main Nationals Park pages. You'll see changes like the new garage-style windows and seating area at the Red Porch (above), new seating on the field-side of the Porch, new seven-foot-tall president bobbleheads for kids to pose with in the "Family Fun Area," a newly branded Exxon(TM) Strike Zone, and some new signage.
There was also a showcasing of the new food being offered by Levy Restaurants, the new concessionaire. To quote the release: "Four new concessions concepts will be introduced at the park including a Healthy Plate cart, featuring healthy wraps, fresh salads, vegetables and hummus and fresh fruit; The Pit at the Red Loft, opening mid-season and serving traditional pit barbeque prepared on a charcoal grill; a barbeque concession stand, also opening mid-season on the main concourse, serving ribs, pulled pork and brisket; and the Triple Play Grill, located in the Left Field V and offering a pulled pork sandwich and foot-long Crab Louie sandwich."
I'll update with links to the media coverage as it comes in.
UPDATE: Hmm, not much coverage that I'm seeing. Here's the Post's Nats Blog (which later posted a list of all the concession locations).
Apr 3, 2009 9:03 AM
Morning Roundup - Back to the Ballpark Edition
I'll be back later today with news from a "What's New at the Ballpark" tour, but here's a few items to clear off the desk first:
* There's a baseball game tomorrow night! It's the Nats vs. the O's in what is looking to become a traditional exhibition game. It's at 6:05 pm (though there's also a shindig for season-ticket holders earlier in the afternoon), and the usual suspects are gearing up to help people get to the ballpark. Metro has updated their Go Metro! Go Nats! page, which includes a brochure on all the bus/rail options. And, because tomorrow has a sports tripleheader (Nats, Wizards, and DC United), Metro is letting people know they're ready. However, the new DC Circulator route (which is run by the city, not Metro) will not be running tomorrow--its expanded service for Nats weekend gates will start during the regular season. On the other hand, the Nats Express shuttle will be running from the free parking at RFK from noon until 90 minutes after the game ends. The Nats have a Way to Go page of their own with details on how to get to the ballpark, but it looks like it still needs a touch of refreshing for 2009.
* While the ballpark tour today will include a sampling of the food offerings at the stadium by new concessionaire Levy Restaurants, Dan Steinberg has already broken the news of the lineup of beers at the ballpark for 2009. Because it's important to have one's priorities straight.
* There may be some better feeling between city officials and the Nats during the pre-game ceremonies tomorrow (where Mayor Fenty will throw out the first pitch and council chairman Gray will give the "Washington, let's play ball!" salute), because the team has paid its 2009 rent on time.
* In non-ballpark news, UrbanTurf reports that Velocity Condos is having a "preview weekend"--apparently they've completed construction on one of the models in the building itself (they've had a full-scale model inside their sales center since it opened last year). Tours are by appointment, with prices starting in the $300s. Their official web site is velocitycapitol.com (though it doesn't mention the preview).
* The WMATA bus garage is now history. The weather's too lousy for me to get pictures today, but I'll get some tomorrow. The question is, will Half Street be open by tomorrow afternoon?
* But, the real cliffhanger of the weekend is: will we be seeing the schoolbuses driven off the Canal Park lots? Those of you with the prime vantage points are deputized to alert us all if you see them driving off (and not coming back).