Last night the Zoning Commission unanimously approved Forest City's Phase 2 plans for the waterfront park at The Yards, which include three glass-enclosed pavilions offering 50,000-sq-ft of retail and a 60-foot "visual marker" at the edge of the water on the boardwalk. You can see more renderings and designs on my Yards Park page (scroll down a bit for Phase 2), and this National Capital Planning Commission report has a lot of information as well, with many of the same drawings that were presented last night. I described it all thusly a few months ago:
The "light tower," designed by James Carpenter Design Associates, is made up of stainless steel prisms that reflect light during the day and will be subtly illuminated at night. The top is actually 70 feet from the top of the water, but 10 feet of that is the boardwalk; the structure itself is only 60 feet high. 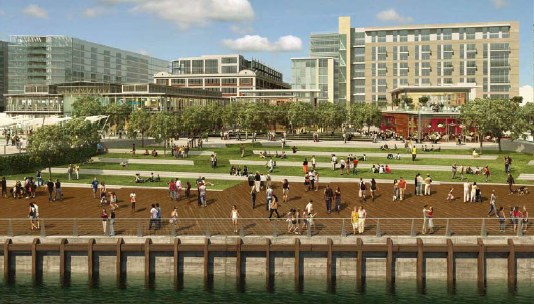 The storage shed, as I've mentioned in the past, will lose its faaaahbulous salmon-colored corregated skin and will be enclosed with non-reflective glass. The other two buildings (currently given the wonderfully descriptive monikers of P2A and P2B) will also be mainly glass structures. There will be a restaurant court in front of the center building, overlooking the area of the park that steps down toward the waterfront.
The commissioners were very complimentary of the designs, with only a bit of concern expressed about whether the tower (made of stainless steel prisms) was either a bit too small for its surroundings (commissioners Jeffries and Keating) or if perhaps its base was a little too plain (May and Turnbull). Turnbull was also concerned about sustainable design features of the pavilions, and, more succinctly, that the walls made all of glass would just make the buildings into "a very hot box." May also said that Forest City needs to come up with better names for the vertical marker and the retail pavilions, though he also dryly added he was "not advocating selling the naming rights."
The Office of the Deputy Mayor for Planning and Economic Development testified in support of the project, and the Office of Planning recommended approval--their staff report is worth reading for more details on the project and on the various zoning exceptions and speical requests Forest City was seeking. ANC 6D voted last month 6-0-1 to support the project, and there were no other witnesses either for or against the plans.
In the end, with the commissioners having made no requests for additional materials or clarifications, it was decided to take their vote immediately, and approval was given 5-0. Because this was a Southeast Federal Center Overlay Review, this was the only vote that will be taken.
The first phase, which is expected to begin construction in the next three months and be completed by mid-2010, is the basic layout of the park and the boardwalks. The third phase will be the piers and marina, which Forest City said last night is targeted for completion in 2012 or 2013.