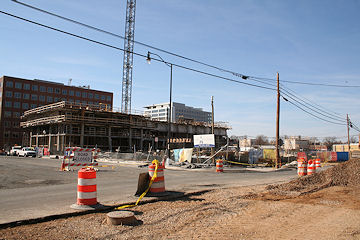 Yesterday I posted a whole batch of updated photos of the ballpark's exterior; today you can check out the project pages for the residential projects 70/100 I Street, Onyx (both opening later this year) and Velocity (2009) along with the office projects 100 M (2008) and 55 M (2009) for lots of new shots of those projects, or you can look at alllllll the photos from yesterday on a single page (ballpark shots, too). Don't forget the

icon if you want to look at how an intersection has changed over the past few years.
Items of note from my wanderings:
* The south side of I Street is now paved between New Jersey Avenue and Half Street, and I've been told that I Street will be "driveable" by Opening Day;
* First Street is now paved south of K, and paving up to I doesn't look far off;
* The Merritt Cab garage at First and K now has a "Moving March 31, 2008" sign on it; and
* JPI's 909 New Jersey Avenue residential building (between I and K) is not far from reaching ground level, so be prepared for the arrival of another skeleton in the skyline before long.
If *I'm* finding it all hard to comprehend and harder to keep up with, I can only imagine how non-obsessive observers must feel. I'm kind of looking forward to the pace slowing back down a bit come May....
Mar 3, 2008 11:01 AM
Monday Morning Roundup and Reminders
* The tarp is coming off the field today--look at that pretty turf! It's probably being done today because Tuesday the Nats are holding a ceremony to install home plate and officially unveil the HD scoreboard (not open to the public).
* The Examiner reports that Metro is tamping down expectations a bit for performance along the Green line for weeknight ballgames: "The transit agency expects the number of riders on the Green Line, which serves the Navy Yard station near the ballpark, to more than triple on game days. But Metro can't add more cars to that section of the system during the week because all of its 820 railcars are committed to rush hour service, officials said." So, perhaps that notion of walking from Capitol South is looking more attractive--I've added to my Take Metro! page a map of the JDLand Suggested Route between Capitol South and the stadium, along with a few photos showing the current state of New Jersey Avenue (which certainly isn't as scary as it used to be).
And, Tuesday is just chock full of Near Southeast-related activities. In addition to the ceremony mentioned above, there's also these items to remember:
* Single-game ticket sales open at 9 am (yes, including Opening Day).
* The City Council will be meeting at 10 am for its monthly legislative meeting, and the agenda includes emergency legislation to enact the "Performance Parking Pilot Zone Emergency Act of 2008", B17-0644, the "Ballpark Safety Emergency Amendment Act of 2008", and B17-0608, the "Vending Regulation Emergency Act of 2008". It's in Room 500 of the Wilson Building, beginning at 10 am, and will be broadcast on DC cable 13 and live webcast.
* The first of two public meetings on the South Capitol Street Draft Environmental Impact Statement is at 6:30 pm at Birney Elementary School, 2501 Martin Luther King Jr., Ave., SE, from 6:30-8:30 pm. The second one is Wednesday night (March 5) at Amidon Elementary School, 401 I St., SW, also from 6:30-8:30 pm.