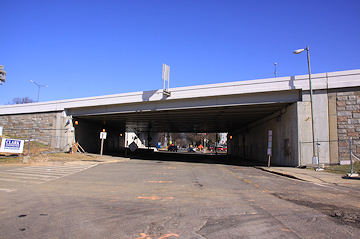 The original plan to temporarily close 3rd Street SE in both directions for a few weeks to allow the construction of a "deck" over the Virginia Avenue Tunnel construction footprint has apparently been rethought, according to a missive this morning from CSX.
Later this week, 3rd Street will be restricted to a single lane of traffic, northbound, from a little ways north of I Street up until through the light just north of the freeway overpass.
In other words, if you want to drive from north of the freeway to south of the freeway, you won't be able to do it on 3rd Street until after the temporary decking is built, which is expected to take "several weeks." At that point, two-way traffic will be reestablished.
Fourth Street will be the fall-back for heading southward, so if you are coming south on 3rd, you'll need to turn left at G Street (the "Results" block) and then right on 4th. (If you are southbound on 3rd, you will still be able to turn right onto the freeway ramp.)
CSX says that "the new plans were developed with DDOT’s approval following community requests to avoid closing 3rd Street during the tunnel project, especially in light of traffic associated with baseball games at Nationals Park."
In other tunnel news, "CSX is pleased to announce that the street-level portion of the demolition of 370 feet of the existing tunnel in the 200 block of Virginia Avenue has been completed several weeks ahead of schedule. While some track-level demolition remains to be completed, the noise associated with this work should diminish significantly for residents near the intersection of 3rd Street and Virginia Avenue, and no additional early-morning or Sunday demolition work periods are expected."
PS: Not my greatest headline, but thanks to the world of search-engine-optimized URLs, it's kind of bad to change it after I've tweeted/Facebook'ed the link. Was trying to make clear from the headline that people coming south from the Hill will be impacted, but it's really just at the Virginia Avenue intersection where the construction is taking place.