1 Blog Posts
Feb 27, 2017 8:32 PM
Photo Update: Surveying the Landscape, Part I
These days I'm generally the last person laying eyes on something new in the neighborhood, but I still find it necessary to conduct photo documentation when the calendar and forecast align. Which they did on Sunday.
Let's look at signs and entrances, starting first at F1rst and its Residence Inn, where it looks like the homestretch has been entered (click to enlarge, of course): Then, let's go over to 4th Street, where the District Winery building continues to zip along. It's also where the Bower is now signed, as is Conte's space in Arris: 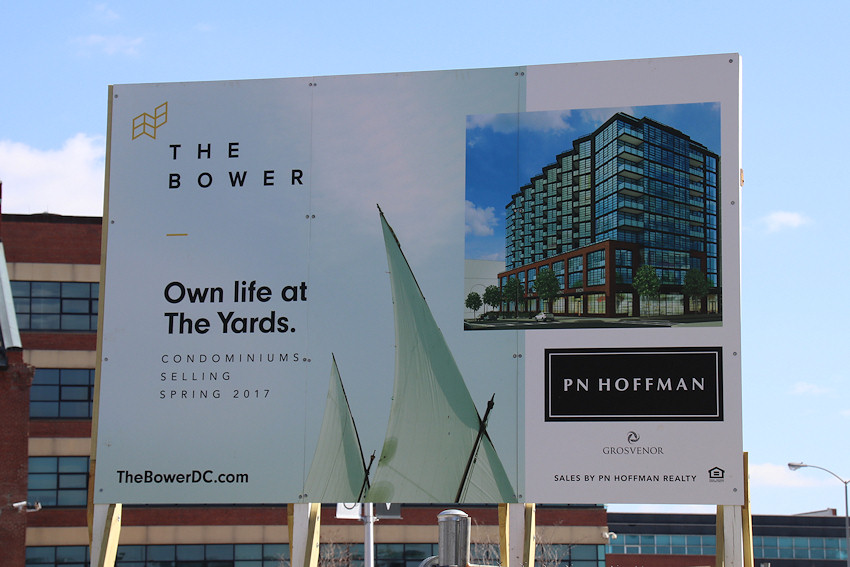 Then we'll double back westward (you're getting a sense for how far I walk on these excursions), taking a look at the new sidewalk on New Jersey Avenue in front of Insignia on M. Shake Shack's signage at the Homewood Suites, and the One Hill South entrance (very New York, isn't it). (I caught the Bethesda Bagels signage back in December, just in case you think I'm missing it.) I even caught the view from the bridge of the new Bardo beer garden at Florida Rock, with a few hardy souls in attendance. Plus, views of both Agora on New Jersey Avenue (aka the Whole Foods Building) and 1221 Van (aka That Big Building On South Capitol Immediately North of the Ballpark): All the links above to project pages have additional brand spanking new pics, and of course Before photos.
Next up, checking out holes in the ground, both current and coming soon.