It's getting hard to keep track of all of the projects in the ground around the neighborhood, and now another one is about to be added to the list: the 195-unit mixed-income apartment building christened the Lofts at Capitol Quarter is having a ceremonial groundbreaking on March 5 at 10 am, with the mayor, Tommy Wells, and other luminaries expected to be in attendance.
This project, on the south side of L Street SE between 5th and 7th, is on the site of the old Capper Seniors building, and will displace the northern half of Nats Economy Lot W. It faces the Marine Bachelor Enlisted Quarters building that opened at 7th and L in 2004.
Of course, since this is a ceremonial event, we'll have to see when actual moving of dirt--other than by shovel-wielding VIPs--begins. But financing is in place, permits are approved, and the DC Housing Authority appears raring to go to get this project underway.
When completed, the building will be run by Forest City's residential management arm, and will have a fitness room, roof decks, interior courtyards, and meeting space. It's expected to take about 20 months to complete once construction begins.
This is the third apartment building to rise up as part of the Hope VI redevelopment of the Capper/Carrollsburg housing project, and the first to be mixed income, with at least 38 affordable units to be included.
The "Capitol Quarter" moniker comes from the rows of new townhouses built a few blocks away as part of the Capper redevelopment. In the original plans for Capper's re-do, this site (known as Square 882) was going to be townhouses as well, but was switched to an apartment building in 2009. The south half of the block, facing M Street and the Navy Yard, may someday be the 600 M Street office development, but that does not appear to be happening anytime soon.
Feb 26, 2014 5:55 PM
Deal Struck for a Homewood Suites Hotel at 50 M Street 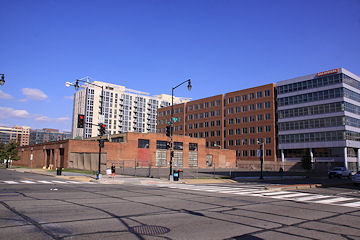 According to the Washington Business Journal, the empty lot on the northeast corner of Half and M is now slated to become a 195-room Homewood Suites Hotel, with a deal having been reached between Hilton and the development group that bought the lot last year.
Back in the pre-ballpark pre-land rush days, a Sunoco station sat on this lot, known as 50 M Street, until 2006, and then the site was bought by Monument Realty in 2007.
The WBJ article says construction could begin on the 11-story building, one block north of Nationals Park, late this year or in 2015, with an opening in 2016. The hotel will have a mix of studio, one- and two-bedroom suites, and about 5,000 square feet of ground-floor retail, which will come in handy with its location directly across the street from the west entrance to the Navy Yard-Ballpark Metro station.
This hotel would join the Courtyard by Marriott at New Jersey and L and the just-getting-started Hampton Inn at 1st and N that is expected to open next year. There is also expected to be another hotel as part of the Ballpark Square development just a few feet north of the Hampton Inn on 1st Street south of M.
Note that this deal does not affect the red brick warehouse just to the north of the empty 50 M lot--that building is owned by the feds and is being salivated over by residents who dream of creating the Half Street Market there.