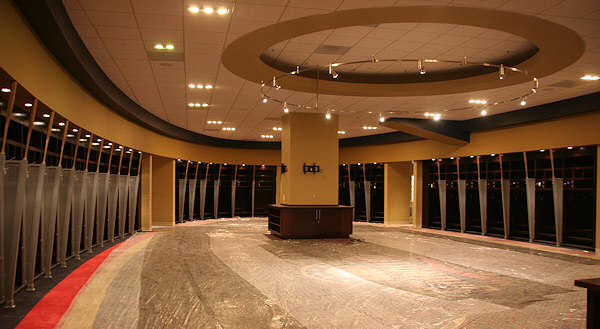 Yesterday I posted what I've always called the "interior" photos of the ballpark, showing the field and the seating areas. But of course, there's now much more to see than just bleachers and cupholders, with the many concession and operations areas inside the structure itself now nearing completion. So here's a gallery of the Interior of the Interior (ahem), including the locker room (seen above), the Presidents and Diamond clubs, the club lounge, and various other spots.
But that's not all. I took the opportunity to add some additional links to the "Interior Views" tab on my ballpark page:
* Views of the Neighborhood - I think one of the biggest surprises for fans making their first visits to Nationals Park will be the wide-ranging views of the city skyline at the ballpark, from the view at everyone's seats of the changing skyline of Near Southeast to gazing up and down the banks of the Anacostia River to the wide vistas of Southwest and Northwest. (Of course, these views look their best when the sun is shining, which I was robbed of in the photos taken yesterday. Yes, I'm still whining.)
* Interior Construction, 2006-2007 - This is a tossed-together automated page that simply displays in chronological order the photos I've posted from inside the ballpark since my first trip inside the fences in October 2006, through the unveiling of the turf in November 2007. They say this will be the fastest construction of a major-league ballpark ever--these photos show just how quickly it went.
* Demolished Buildings - Lifted from my main Demolished Buildings gallery, this page shows what was on the site of the ballpark before the wrecking ball arrived in May 2006.
If you haven't yet seen the dreary overcast photos from yesterday of the field, seats, and concourses, you can check those out, too. And there's also the images of the ballpark's exterior, last updated two weeks ago. (When the sun was out.)
Feb 24, 2008 8:42 AM
Morning Ballpark Roundup

It's probably best to steer clear of me today, because I'm going to be spending the entire day mumbling profanities as I look up at the gorgeous cloudless skies. But if you want to see what the ballpark would look like if it were transported to, say, Detroit in the dead of winter, be sure to look at my photos from inside the stadium taken yesterday morning. Later today I'll put up pictures from the interior of the building, where at least the weather didn't play quite so much of a role. In the meantime, here's some quick items on the ballpark:
* The Post has two articles today on Nationals Park--one looking at the resident hiring goals that were set versus the actual number of DC workers that have been hired, plus a much lighter look at yesterday's testing of the plumbing system, aka "Super Flush."
* A few people have written to ask me about news that has been mentioned either on the radio or in an MLB.com video that the first game at Nationals Park will actually be a March 22 game between George Washington University and St. Joseph's. GW's schedule shows the game as being played in Arlington, and I've seen no official word anywhere on this game, but the rumor is out there. Nationals owner Ted Lerner is a GW graduate and patron.
* I've also been asked lately about newer renderings of the stadium that no longer show the big baseball on top of the outfield restaurant (which is now called the "Red Porch Restaurant"). It is indeed no longer part of the ballpark plans. The cherry blossom trees will still be coming, though!