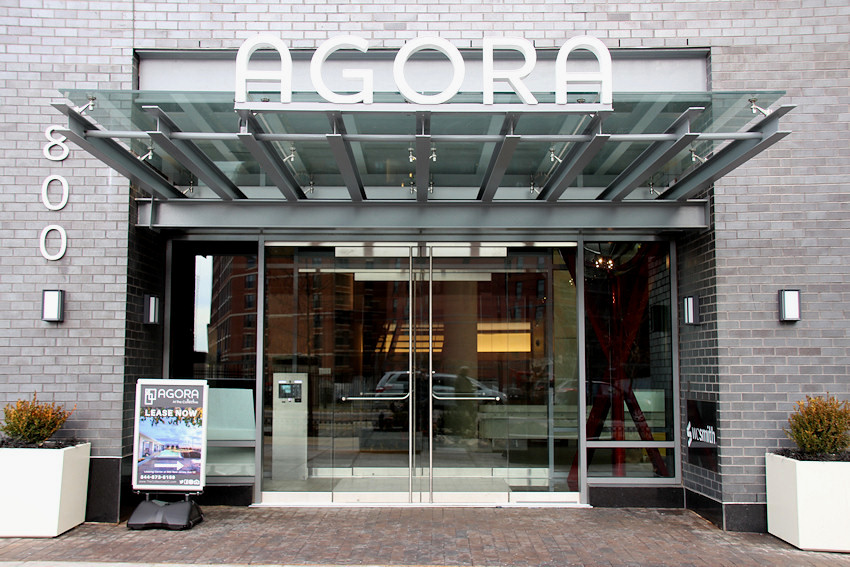 Another apartment building has officially arrived in the Hood, as this past weekend Agora at 800 New Jersey Ave. opened for both leasing and move-ins on its lowest residential floors.
(Yes, it's the building with the Whole Foods coming to the ground floor. No, there's no word on when it will open, but they have filed for their permits and are still waiting for the city to approve them.)
The JDLand camera was invited for a tour of the new digs, the second of the three buildings in WC Smith's "Collective" development, along with the already completed Park Chelsea and the just-getting-started Garrett.
The official web site has all sorts of information, such as floor plans and prices for released floors and such. It will likely be summer before all floors and the roof spaces are completed. Right now, the rents range from $2,260 for a one-bedroom to $5,040 for one of the three-bedroom corner units.
The amenities include not only the building's own offerings of a game room, demonstration kitchen, fitness center, rooftop pool and dog run, aqua massage chair, and even a golf simulator (no, really), but also access to the amenities at the Park Chelsea and the Garrett (once it's completed).
Here is a sampling of the photos from today, but be sure to check out the gallery to see all of them.