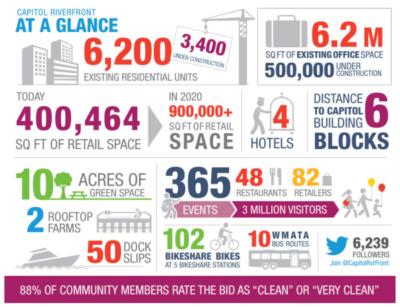 With the room buzzing about DC making the short list in the Amazon HQ2 season of Survivor, the Capitol Riverfront Business Improvement District celebrated its 10th anniversary at its annual meeting, in the Norfolk Southern Club at Nationals Park.
You can see the full annual report here, or page through the presentation slides, or check out "Riverfront Recaptured," a report on the neighborhood's fiscal impact on the city, which says that this year the District will break even on its $1.1 billion of public investments in the neighborhood (Nats Park, 11th Street Bridges, etc.). I grabbed the At a Glance page of the annual report so you can see the bullet points at a, you know, glance.
Mayor Bowser and Councilmember Charles Allen both spoke, and there was a panel discussion featuring Adam Gooch of Akridge, Chris Smith of WC Smith, Deborah Ratner Salzberg of Forest City, and some blogger, who also was surprised with a presentation of the BID's Community Partner award.
As for tidbits gleaned during the festivities, there's probably really only one that anyone will want to know, which is that It was whispered to me that Whole Foods is ready to roll on its buildout, except that its permits still haven't made it through the DCRA Play-Doh Fun Factory.
Meanwhile, outside the stadium gates, a new member of the Half Street Crane Farm was being birthed this morning, and the photo I took gives a hint of how much the block immediately north of Nats Park is about to change. ("Finally," some people might be saying.) 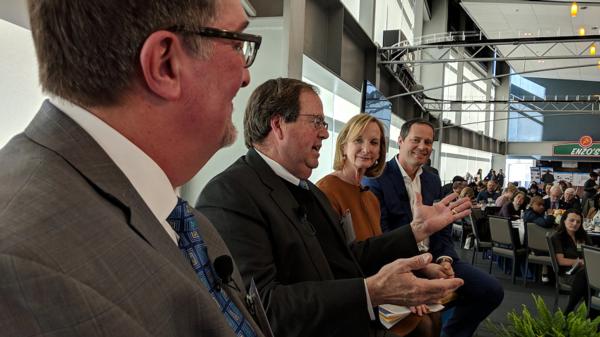 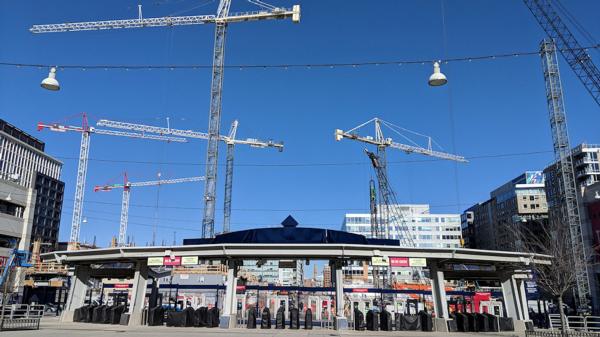 So, happy 10th to the BID, and happy almost 15th to JDLand, as it was on January 19, 2003 when I made Mr. JDLand take me on that fateful car tour so I could get some pictures of that strange, somewhat forbidding area south of the freeway.