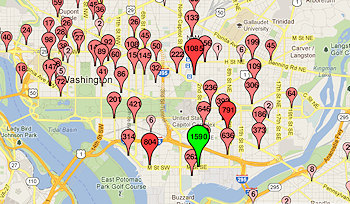 When word gets out that some new data set has been posted in an easily digestible format, I am pretty much helpless before its power. So I spent the Friday night of a holiday weekend knee deep in Bikeshare Trip History Data, culling out the nearly 30,000 more than 28,000 records for trips that either originated or ended at Near Southeast's two docks in 2011. Then I fired up up the Google Maps API to bring it all to you in interactive map form.
You'll choose whether you want to see inbound or outbound data for the dock at New Jersey and M in front of the US Department of Transportation or the dock at 1st and N just across the street from Nationals Park. Optionally, you can filter by month of the year or even a specific date. (Tip: green means starting point, red means ending point.) Then there are tables beneath the map that show, for your chosen data set, the number of registered vs. casual users and the top usage days.
It shouldn't be surprising that the docks at the Eastern Market Metro Station and at 4th and M SW (Safeway) are very popular destinations/starting points for the Near Southeast docks, but I'm surprised to be surprised that the top dock for New Jersey & M trips in both directions is Union Station.
Capital Bikeshare is apparently going to release this data quarterly, so I plan to keep the map/search app updated as long as there's data coming. And there should be a new dock in the neighborhood sometime in 2012, at 3rd and Tingey.
PS: Speaking of Bikeshare, read this fascinating piece on one man's transformation into a bicycling commuter thanks to Capital Bikeshare being a "gateway drug." (Any full disclosure I need to make about this link should be pretty clear in the second and fourth paragraphs.)
UPDATE: After reading this great post by JD Antos with scads of analysis of the city-wide Bikeshare trip data, I dug into my tables a little more closely to clear out "rides" of less than 60 seconds' duration at a single station and found that I had inadvertently doubled the records where the both start and stop stations were the two Near Southeast stations. (Argh.) Not a huge change in the data (about 1,250 records out of nearly 30,000), and most likely the data people would have been looking at today would have been for the trips outside of the neighborhood, but I have now cleaned out that boo-boo. And I've deleted 167 sub-60-second trips at a single station as well, just because.
UPDATE II: I added both Union Station and the new dock just north of the freeway at 3rd and G to my Live Transit Data page, which includes a table of the closest docks and their capacity status, along with other live data like Next Train, Next Bus, and Where's My (Circulator) Bus?