peek >> << back
Near Southeast DC Past News Items: winterclassic
Advertise on JDLand 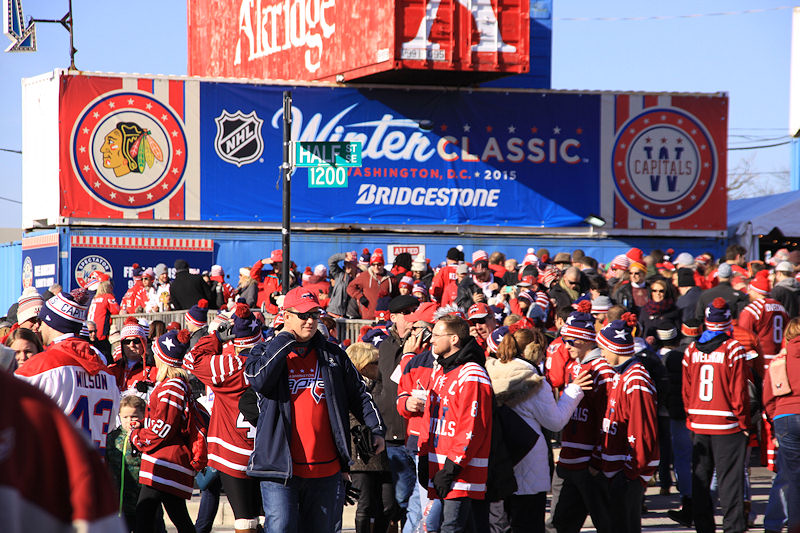 It was quite a mass of jersey-wearing humanity that descended large and early on Near Southeast this morning for the NHL Winter Classic. The crowds on Half Street even by 11 am were huge, and the local beverage establishments were doing big business as well.
So of course I wandered around with my camera to get some photos of the feel around Nats Park on this beautiful and crisp first day of 2015, and the shots confirm the size of the throngs, and that most everyone was indeed Rocking the Red.
Could a victory propel an evening of revelry in the neighborhood? We shall see! 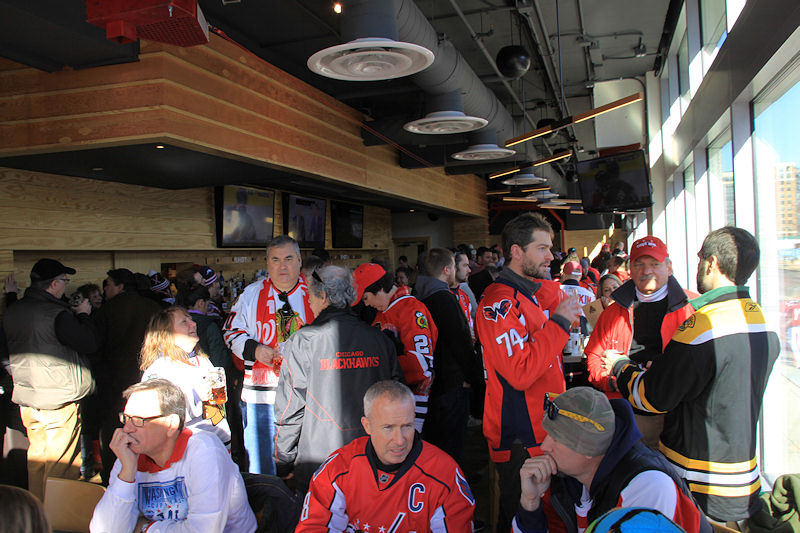 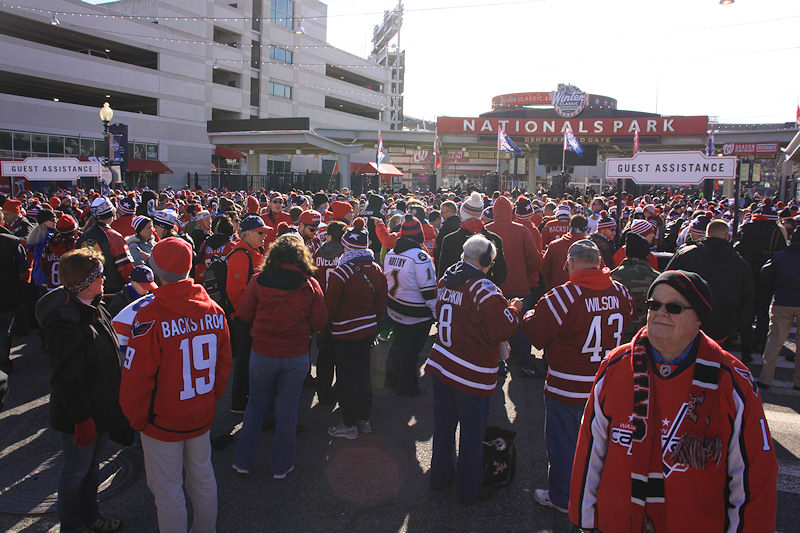 It's almost that time, with the NHL Winter Classic's puck drop now less than 48 hours away, at 1 pm on Thursday, Jan. 1 at Nationals Park. (Check out the webcam to watch as preparations inside the stadium are rushed to completion.)
While tickets aren't easy to come by without a sizeable wad of cash, there will be events around the neighborhood where the both lucky ticket holders and unlucky ticket unholders can congregate before, during, and after the game.
* OFFICIAL FAN FESTIVAL: As mentioned previously, the official SPECTATOR PLAZA PRESENTED BY GEICO will be set up at the Fairgrounds at Half and M streets, SE, from 9 am until 1 pm, with all manner of attractions, prizes, food, music, and purchasing opportunities.
* ROCK THE RIVERFRONT: Starting at 10 am and running until 7 pm, Canal Park will celebrate the Winter Classic with its own free "Rock the Riverfront" festival, with CBS radio station 106.7 The Fan broadcasting live from the roof of the Park Tavern before and after the game. There will be live music, beer from DC Brau, food, ice skating (natch), former Caps players (including Dave Christian), and more. And the game will be broadcast on multiple TV screens.
* OTHER VENUES: Willie's will open at 8:30 am, the Big Stick at 9 am, Bluejacket at 10 am, Justin's Cafe at 11, and Biersch at 1 pm (because of a private event earlier in the day)--the Post's Going Out Guide has more on what these places will be offering. And of course my Food Options map gives you the complete lineup of eateries and drinkeries in the area.
* CAPS MASS: St, Vincent de Paul church at South Capitol and M SE is providing a special Winter Classic Caps Mass at 11:30 am.
* BIKESHARE: (ADDED) There's going to be a corral from 11:30 am until 30 minutes after the game at the dock at 1st and N SE.
And now, the buzz-kill items:
* ROAD CLOSURES: MPD has announced road closures from 8:30 am until approximately 6:30 pm, including Potomac Avenue south of the ballpark, 1st Street south of M, N Street from South Capitol to Tingey, and Half, Van, and Cushing (?) between M and N.
* PARKING: Even though it will be New Year's Day, don't be thinking you can park free and clear on the streets in the neighborhood: DPW has announced that residential parking restrictions will be enforced. My map of close-by parking lots should be relatively accurate in terms of locations, though probably not prices. UPDATE: However, apparently meters will not be enforced.
Finally, if you are desperate for not-necessarily-hockey-related outdoor festivities but can't wait until Thursday:
* NOON YARDS EVE: On Wednesday, Dec. 31, from 10 am to 1 pm there's the free Noon Yards Eve. Billed as "a fun daytime New Year's Eve celebration for the family and children," it will feature a big countdown and balloon drop at noon, along with lots of activities for the kids and a "trackless train ride" through Yards Park.
Dec 16, 2014 11:11 AM
Free 'Fan Festival' at Fairgrounds for NHL Winter Classic 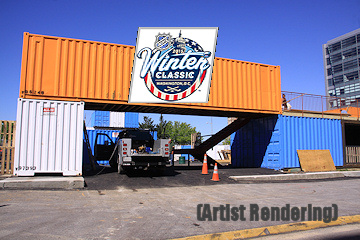 A press release today gives official details on the SPECTATOR PLAZA PRESENTED BY GEICO that is going to be set up at the Fairgrounds on Half Street during the hours leading up to the NHL Winter Classic® at Nats Park on Thursday, Jan. 1.
From 9 am until 1 pm, the Fairgrounds "will transform into a hockey and entertainment festival" with "live musical performances, interactive hockey-themed attractions, prizes and giveaways, food and beverages and retail tents with an extensive selection of of officially licensed 2015 Bridgestone NHL Winter Classic® merchandise and collectibles."
The event's sponsors are definitely pulling out all stops for the Fairgrounds offerings. I started to include the highlights, but I got worn out at the length and breadth--so read the press release to find out what is being offered by Bridgestone, GEICO, Reebok-CCM, Oscar Mayer, Honda, Enterprise, McDonald's, Miller-Coors, York Heating and Air Conditioning, Ticketmaster, AMP, and various other NHL-related offerings.
It's all free and open to the public. And then there's the game itself, between the Caps and the Blackhawks, at 1 pm.
Sep 25, 2014 7:42 PM
Tidbits: Vet Hospital Permit, Winter Classic Now Official, Ramp Reopened 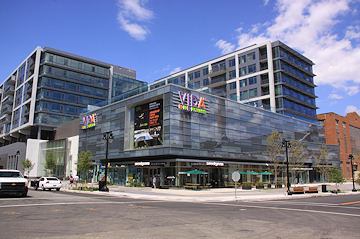 * TRAILER PARKED: A few readers have passed along the news that a construction trailer has appeared within the past week or so on the Florida Rock site along the Anacostia River just south of the ballpark. While plans are to get underway Any Minute Now on the first-phase 350-unit apartment building at the site's eastern end, next to Diamond Teague Park and Piers, there's not yet been any news that the construction financing has been finalized, nor is there as yet an approved shoring/sheeting/excavation permit. But the time does appear to be drawing nigh that development of this 5.8-acre parcel will finally get underway, at which point people will shift from complaining about the empty lot right across from the ballpark to complaining about a tall building ruining the views of the river.
Sep 6, 2014 5:43 PM
2015 NHL Winter Classic Said to Be Confirmed for Nats Park 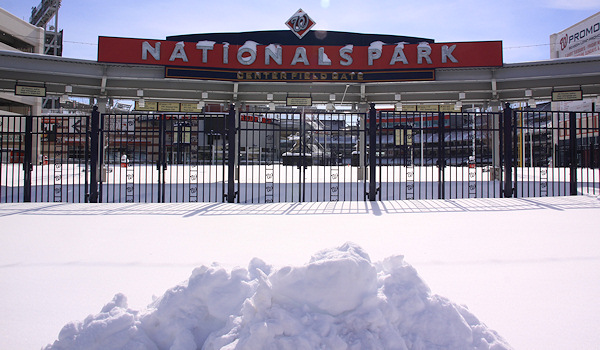 The Washington Post is reporting this afternoon that hockey is coming to Nationals Park in a few months: "The NHL and the Washington Nationals have reached terms allowing the 2015 Winter Classic game, set for Jan. 1 between the Capitals and Chicago Blackhawks, to be played in the D.C. ballpark, according to three people familiar with the negotiations."
It was announced almost a year ago that the game would be coming to DC, and there were "reports" in December of 2013 that the ballpark had been chosen as the location, but apparently there were "several issues" needing to be resolved. An official announcement is expected "very soon," says the Post.
It's been a long road to this, with rumors first flying back in 2010 that the Winter Classic would come to Nats Park in 2011.
Now let's hope it's not 70 and sunny on Jan. 1.
Dec 30, 2013 3:51 PM
Report: '15 NHL Winter Classic Coming to Nats Park
I hate writing a post that's based on "a source" telling a news outlet something, but I would be remiss if I ignored that "The 2015 Winter Classic will more than likely be staged at Nationals Park, a source told ESPN.com on Monday."
It was announced in September that the Capitals would be hosting the 2015 incarnation, but officials had been checking out RFK Stadium and FedEx Field in addition to Nats Park.
The now-annual New Year's Day outdoor NHL game has been rumored for DC for a few years, going back to a 2010 report saying that the Capitals were favorites to host the 2011 game (oops), which prompted council member Muriel Bowser to introduce the ceremonial resolution "Sense of the Council that the District of Columbia Should Host the 4th Annual NHL Winter Classic." I guess it worked! (Though let us remember that this is still not official.)
Too bad that the hotels on the boards just north of the ballpark probably can't be ready within the next 12 months....
UPDATE: And now WaPo weighs in with its own "The 2015 NHL Winter Classic will likely be held at Nationals Park in Southeast Washington, according to a person with knowledge of the situation."
Jan 9, 2012 9:52 AM
A Few Oh-Yeah-I-Meant-to-Mention-That Tidbits 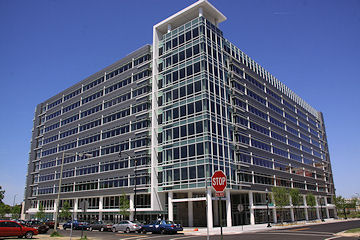