peek >> << back
Near Southeast DC Past News Items: Velocity Condos
Advertise on JDLand 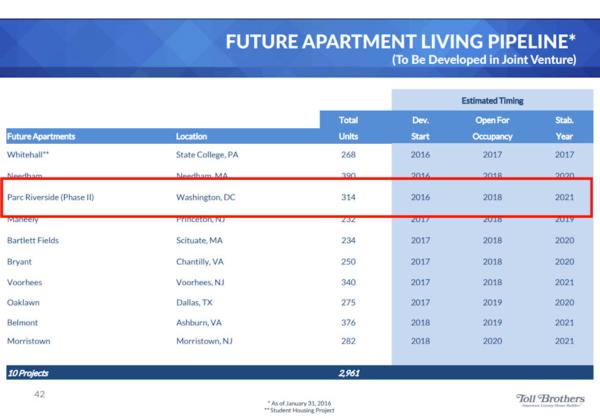 It appears that we can now add the second phase of Toll Brothers' Parc Riverside development to the lineup of projects that look likely to get underway in coming months, as evidenced from this page deep within a recent Toll Corporate Profile document that lists a 2016 start date and 2018 completion date.
This would be built just to the west of the Parc Riverside and Velocity, along Half Street SE between K and L.
The "Apartment Living" header does also seem to indicate that the planned 314 units will be rentals.
Just as soon as I found this, though, my digging was rendered unnecessary when representatives for Toll appeared at Monday night's ANC 6D meeting requesting support for a public space permit they are applying for.
I wasn't at the meeting, but my understanding is that while Toll said they are hoping to break ground in 2016, they are still in the design phase and are going to need a minor variance for some projected balconies and windows, which would then need to be followed by the usual building permit process.
As for the design, a rendering was shown that looks remarkably like the first-phase Parc Riverside. (I don't have permission to share it, alas.)
And there is apparently a fly in the ointment in that Toll is planning that the access to the Phase 2 underground garage will be through the Velocity garage, as was designed back when the entire block was going to be developed by its then-owner, the Cohen Companies. But Cohen, still the owner of Velocity, apparently disagrees that this access was part of the deal when Toll purchased this lot from Cohen for $14.5 million in 2012.
ANC 6D voted 6-0-0 to send a letter to DDOT recommending that the agency determine whether Toll should be able to use the Velocity garage entrance, but that even if it's decided that Toll does have that right, that "DDOT should still consider the traffic impact of allowing a large number of additional cars to use this garage entrance." The commission also supported the request for a curb cut for a loading dock, but "believes that K St. SE is a better location for a curb cut and loading dock because L St. SE already has numerous curb cuts," while recognizing that this switch "would require substantial redesign" for the project but with what it believes would be a "far superior outcome." (The letter also notes 6D's "general philosophical concern with projections into public space for bay windows.")
More information should be available once the variance is applied for, assuming that remains part of Toll's plan.
Jun 14, 2014 8:31 AM
Velocity Residents to New Neighbor River Parc: Down in Front 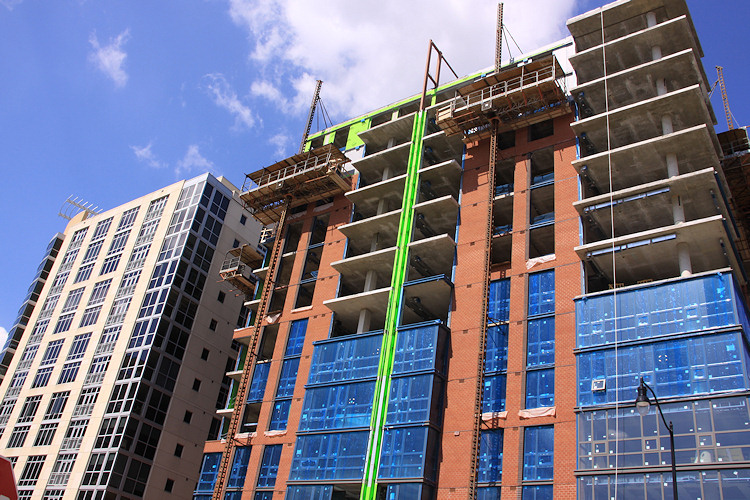 Way back when, the Cohen Companies' plan on Square 699N was to build the Velocity condo building at 1st and L and then almost immediately start work on a twin residential building directly to the north.
Velocity went up, but the twin did not follow for nearly four years--after Cohen sold the empty lot to Toll Brothers, which is now building the River Parc apartment building on the site. And having a different developer build the twin has brought about a sticky situation.
Within recent days, Velocity residents have discovered that Toll's layout for the River Parc roof includes a wall that completely obscures the formerly expansive Capitol dome views from Velocity's roof deck.
This Facebook page shows the old view from Velocity's roof--and the photo below, provided by a resident, shows the new one. 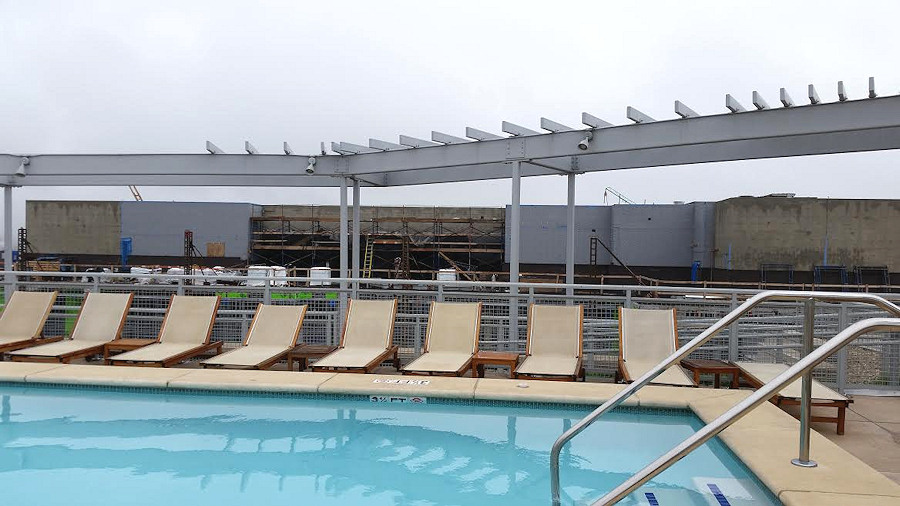 In addition, the new building's design appears to place the building's 237 air conditioning units on the south side of the concrete wall, facing Velocity.
A recent e-mail to Velocity residents informed them that "[T]he ANC Commissioner, The Department of Consumer and Regulatory Affairs and the offices of Planning and Zoning have all been contacted and we are being told that all construction is being done in accordance with all plans, permits, zoning, and easements" and that "Every avenue is being pursued to somehow make this situation better for us." Alas, "[A]s long as they are within all legal parameters of their construction of this building, there is little we can do." 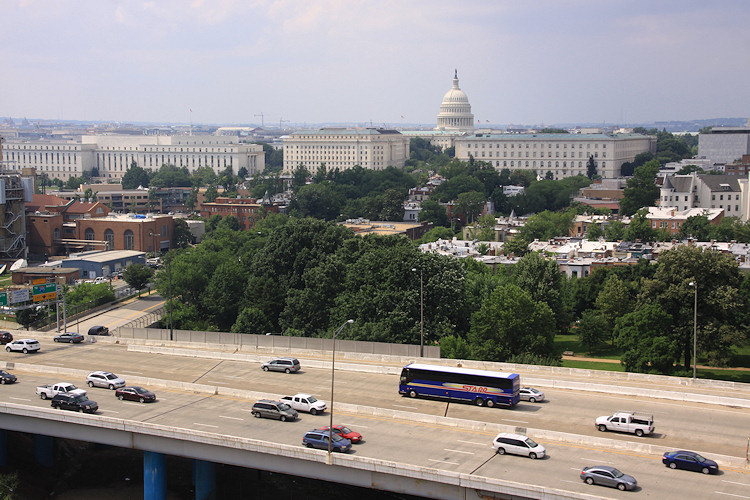 Capitol Dome views are a sticky wicket in the neighborhood, since almost all of the buildings that have already gone up stand to eventually lose their panoramic vistas as newer projects continue to fill in the empty spaces. (Just ask Nationals Park!)
The exceptions are 70/100 I (aka the Jefferson and Axiom) and the about-to-be-built 800 New Jersey, all of which border the freeway and so will likely keep their views pristine, as long as Capitol Hill north of the freeway doesn't suddenly start to allow 13 stories of construction.
But an impenetrable concrete wall certainly puts an exclamation point on the issue.
Jan 23, 2014 10:45 AM
To-Do Tidbits: Billy Joel at Nats Park, and More
The neighborhood has come so far that a more specialized type of Tidbits post is now being added to the lineup, to better handle upcoming event announcements. I'm also reconstituting my Near Southeast Events Calendar, down the right margin of the JDLand home page. (And it's a Google calendar, if you want to subscribe to it.)
* NEW/OLD CONCERTS: The Nationals announced this morning that Billy Joel is playing Nats Park on July 26, his second appearance at the stadium (the first being his joint appearance with Elton John in 2009). Tickets go on sale to the public on Feb. 1 at 10 am.
This is the third stand-alone concert scheduled for the ballpark for 2014, along with the already confirmed appearance by country star Jason Aldean on a date to be announced and the big One Direction show on Aug. 11.
* NEW/OLD TUNNEL: On Saturday, Jan. 25, at 2 pm, there is another neighborhood meeting with DC Delegate* Eleanor Holmes Norton about the Virginia Avenue Tunnel, this time including representatives of the Environmental Protection Agency to discuss the project's potential impacts. The meeting is at 200 I St. SE (the old Post Plant) - a photo ID is required to attend. More details at DCSafeRail.org.
* LOCAL ART: The social committee at Velocity has collaborated with the Capitol Hill Art League to display "Signature DC," a collection of art by local DC artists. There is a reception on Jan. 25 from 5 to 7 pm, with proceeds from the sale of the $15 tickets going toward a Community Artists Fund for the condo building to purchase local art for permanent display. Tickets can be purchased via Eventbrite.
* CANDIDATE, MAYOR: The "All Politics is Local" series of forums with mayoral candidates kicks off with Tommy Wells at the Hill Center at 9th and Pennsylvania SE on Jan. 27 at 7 pm. The series, hosted by NBC4 reporters Tom Sherwood and Mark Seagraves, continues on Feb. 10 with Muriel Bowser and March 10 with Jack Evans.
* CANDIDATE, COUNCIL: On Tuesday, Jan. 28 at 6:30 pm, there's a meet-and-greet with Ward 6 council candidate Charles Allen in the Velocity Condo meeting room. The primary election is on April 1, which suddenly isn't really all that far away. UPDATE: Non-Velocity residents should sign up in advance here.
* NEW/OLD SCHOOL: The new Van Ness Parent Group is holding a community meeting on Feb. 1 to get supporters together to talk about the elementary school's scheduled reopening for the 2015-16 school year. The meeting is at 11 am at Capitol Hill Tower, 1000 New Jersey Ave SE.
If you've got a neighborhood event you want mentioned in a To-Do Tidbits post, you can contact me with the details and I'll try to get a capsule up. I will aim to post them each Thursday, if there's enough content.
(* Despite perpetual billing to the contrary, Ms. Norton is a delegate, not a congresswoman representative (UPDATE: see comment thread below). She doesn't have voting rights on the House floor, as she would if DC had full congressional representation. I can't believe there still isn't a catchy Schoolhouse Rock song about this.)
Oct 31, 2012 12:10 PM
Toll Brothers Buys Second Square 699N Lot From Cohen 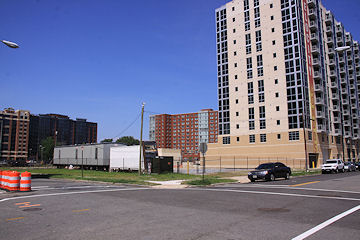 DC property records show that on Oct. 1, "Toll DC LP" paid $14.5 million to the Cohen Companies for the final empty lot on the Square 699N/Velocity block, running along the east side of Half Street SE between K and L, across from 1015 Half Street.
With Toll's $24 million purchase back in May of the 1st and K portion of the same square with plans to build a 250ish-unit residential building, this now gives the company a second toe-hold inside the District, both on the same block.
There are rumors that the 1st and K site could see construction start in the spring, but there have been no announcements. (And I can't really even say "wait to watch for digging," since on that 1st and K site the garage and underground infrastructure was already dug and completed when the Cohen companies built Velocity.)
It's starting to be quite a tote board of projects that "could" begin in 2013. Florida Rock residential, the Park Chelsea, the new Yards Parcel N building, Square 701.... Maybe we should start a pool!
May 2, 2012 11:08 AM
Toll Brothers Buys Velocity Sibling Site, Will Build Residential 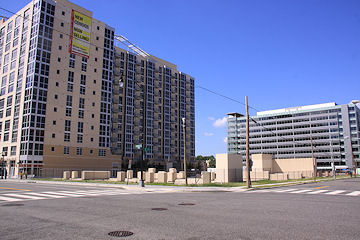