peek >> << back
Near Southeast DC Past News Items: Boathouse Row
Advertise on JDLand 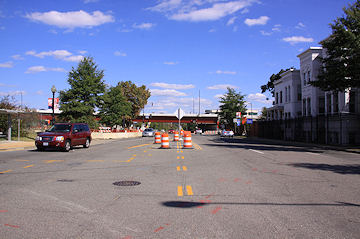 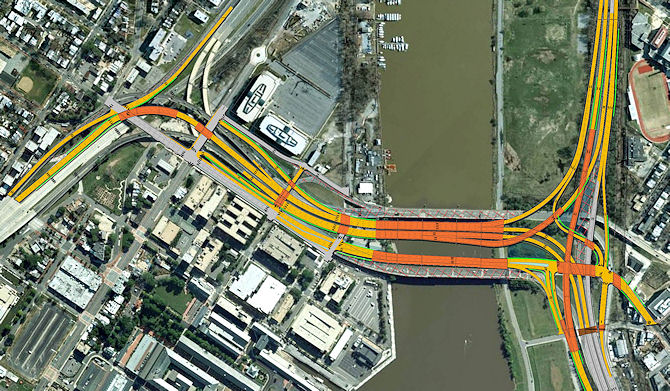 On a chilly morning (with winds high enough to scuttle the planned boat tour), DDOT announced that work is officially underway on the new 11th Street Bridges, the $300 million four-year project to build three new spans across the Anacostia River to provide both expanded freeway access between I-295 and the SE/SW Freeway and a new local-traffic bridge connecting Anacostia and Near Southeast.
Pile driving in the river is expected to start within the next day or two (it was supposed to start today, but the winds scuttled that, too). Engineers said it should be at least 18 months before there are any changes to the traffic flow on either side of the river.
The biggest changes in the configuration of the bridges will be the new ramps allowing for access from southbound I-295 to the bridges and from the bridges to northbound DC295, meaning that much of the neighborhood cut-through traffic and bad flow on Pennsylvania Avenue should be mitigated, though residents who oppose the expansion of the bridges' capacity--such as the Capitol Hill Restoration Society--differ with DDOT on the benefits of the project.
The third span--a "local street that happens to cross a river," in the words of DDOT's Bart Clark--will be built with streetcar tracks included in the two curb lanes, and will also include wide pedestrian/cycling paths, bulb-out bridge overlooks (where you can stop and look at the view without impeding the flow), and even osprey nest perches down by the water. This span, allowing local traffic to cross the river without having to mix with high-speed freeway traffic as it currently does, will reach street level at O Street on the west side of the river, which will also make for an easy connection to the Anacostia Riverwalk Trail. And all new bridges will be built with shoulders, to help lessen backups when there are accidents.
One additional change in all of this is that the Anacostia Community Boathouse operations, which are currently nestled between the existing spans, will be permanently moved northeast, to the Anacostia marina, and the old red brick buildings will be demolished. (A temporary structure is being built to get their operations moved by spring.)
For the next few months, pile driving and some off-roadway clearing and minor lane shifts on DC-295 will be the extent of the construction, but by late spring or early summer there will begin to be work underway on both O Street and M Street
I've added new graphics to my 11th Street Bridges page that show the plans for the new bridges. It will be an interesting project to watch over the next few years.
In addition, demolition work on the existing ramps to and from RFK has perked back up again, and there will be lane closures on the portion of the freeway that connects to Pennsylvania Avenue within the next few weeks. (If you saw the variable message sign at the Sixth Street SE exit that said "Freeway to be closed on or about 1/9/2010," it was a bit of a verbiage boo-boo that was meant to alert drivers to the coming lane closures, and is being fixed.)
There was a decent amount of press at the briefing (both Dr. Gridlock and Bob Marbourg were in the house, so you know it was serious), and I'll be updating this entry as stories come online, most of which will no doubt give more focus to the changes coming to the east side of the river than I have here (though I have posted some enlarged graphics that show both sides of the river). Here's the DDOT press release, fact sheet, and FAQ.
UPDATE: Links to Dr. Gridlock, WTOP, and City Paper. And WUSA. (I won't bother with pieces written right off the press release.)
UPDATE II: A bike-centric look at the plans from WashCycle.
Dec 3, 2009 9:17 AM
Next Week's Events (Justin's Cafe Liquor License, Boathouse Lighting, ANC6B)
A couple events on the calendar for the week of Dec. 7 to highlight:
* On Wednesday, Dec. 9, ANC 6D's ABC committee will be having its monthly meeting (in advance of the full ANC meeting on Dec. 14), and on the agenda is "presentation of plans by Justin Ross re Justin's Cafe planned for 1st & L Streets, SE." This is the first step in the (long) process for Velocity's restaurant to get its liquor license, although I haven't yet seen an announcement/posting for their official ABRA hearing (maybe it'll be in tomorrow's DC Register). The meeting is at 7 pm at King Greenleaf Recreation Center, 201 N Street, S.W.
* The Anacostia Community Boathouse Association will be having its annual Boathouse Lighting and Awards Ceremony on Tuesday, Dec. 8, at 6:30 pm. This year's honorees include Tommy Wells, winner of the ACBA's "Champion" Award, who will get to flip the switch to turn on the holiday lights. The boathouse is at 1115 O Street, SE, nestled between the two spans of the 11th Street Bridges.
* ANC 6B (which is mostly Capitol Hill but includes the Eighth Street area south of the freeway in its boundaries) is having its monthly meeting on Dec. 8, and it includes a presentation by WASA on the Combined Sewer Overflow Project, and a resolution on the Ward 6 Residential Parking Protection Pilot Act of 2009, which has its city council hearing on Dec. 10. The meeting is at 7 pm at the Old Naval Hospital at 921 Pennsylvania Ave., SE.
Aug 7, 2009 10:00 AM
Reminder: Youth River Sports Day on Saturday
A reminder: tomorrow (Saturday, Aug. 8), the 3rd Annual Youth River Sports Day will be held at the Anacostia Community Boathouse, from 10 am to 2 pm. Rowing and paddling instruction, guided river tours, and more will be offered; my photos from last year's event give a taste of the activities.
36 Posts:
Go to Page: 1 | 2 | 3 | 4