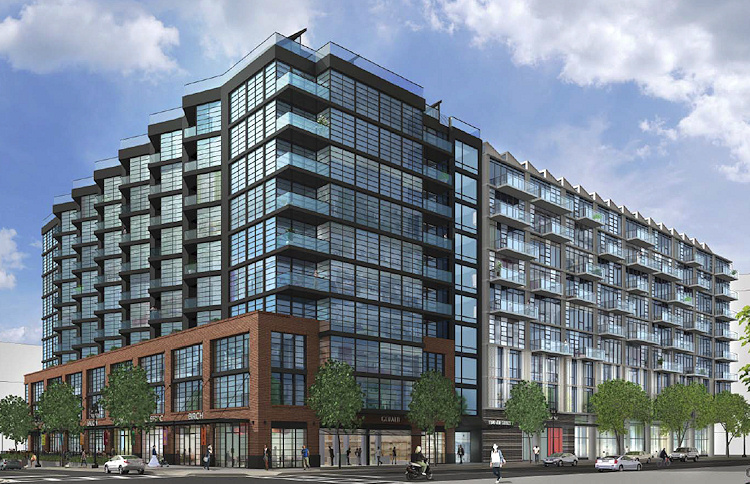 Last week developer PN Hoffman announced the completion of a $20 million financing deal that will allow its 138-unit condo project at 4th and Tingey in the Yards to break ground in the first quarter of 2016.
The building, seen on the left side of this rendering, will have about 12,000 square feet of ground-floor retail as well as below-grade parking, and is expected to be finished in 2018. It was designed by Handel Architects and WDG, and it's not hard to see brick-and-glass echoes of Arris, its cousin across 4th Street.
The financing was provided by Grosvenor Americas' Structured Development Financing program, for those of you keeping score at home.
According to the sign erected a few weeks back, sales are supposed to start this spring.
And at the same time Hoffman's condo project is being built, Forest City will be building its own rental building immediately to the south, with 190 units in two towers (as seen on the right side of the rendering and in other renderings on the project page).
This is the site where the trapeze school has been camped for the past few years, and it's why they are moving to their new digs at New Jersey and Tingey Any Minute Now.
Hoffman's building (technically known at this point at as Parcel O-1) will be the first condo project in the Yards, and will also be the first condo project to get underway in the neighborhood since Velocity started its construction in 2007--and looks to be on the vanguard of a mini-wave of condo offerings, as both developments at Half and N just north of Nats Park are slated to have condos, along with perhaps a future project at Half and L and one on Square 767 on the old Capper footprint.