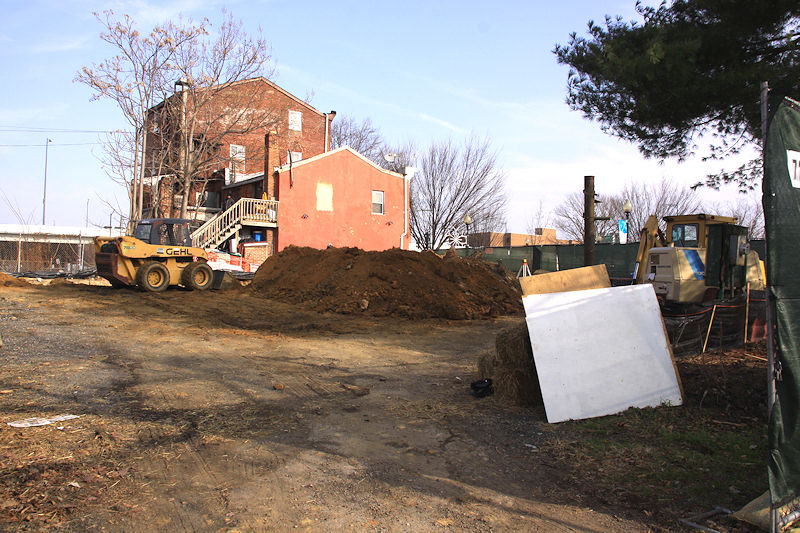 I could blather on in some kind of forced introduction about how the weatherman sold my camera and me a bill of goods this weekend ("mostly sunny," eh?), and how the low sun and weak light and wispy clouds made for less-than-stellar images, but instead let's just jump in.
We'll start with the photo at right, which shockingly reveals that dirt is actually being moved on the northwest corner of 8th and L, where the beer garden now known as The Brig has been planned for such a long time. Clearly work is in the very early stages, but that's a nice change from no progress at all. It's supposed to open in the spring.
Continuing the tour.... 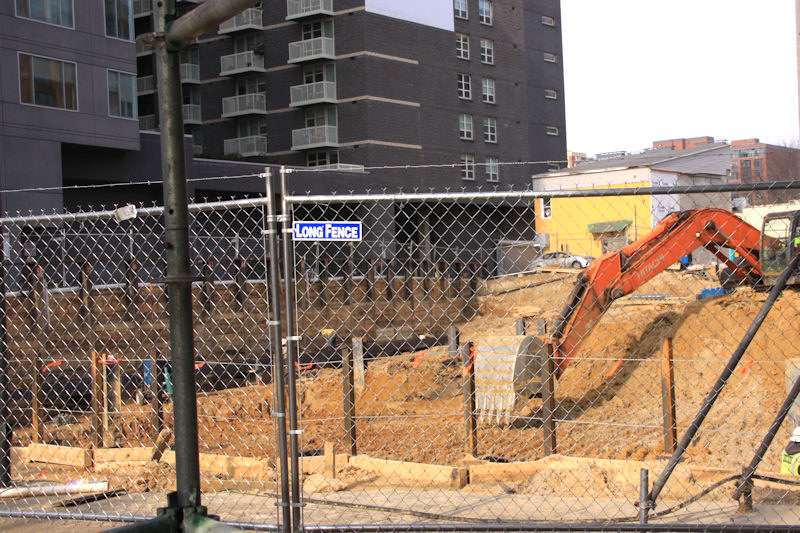 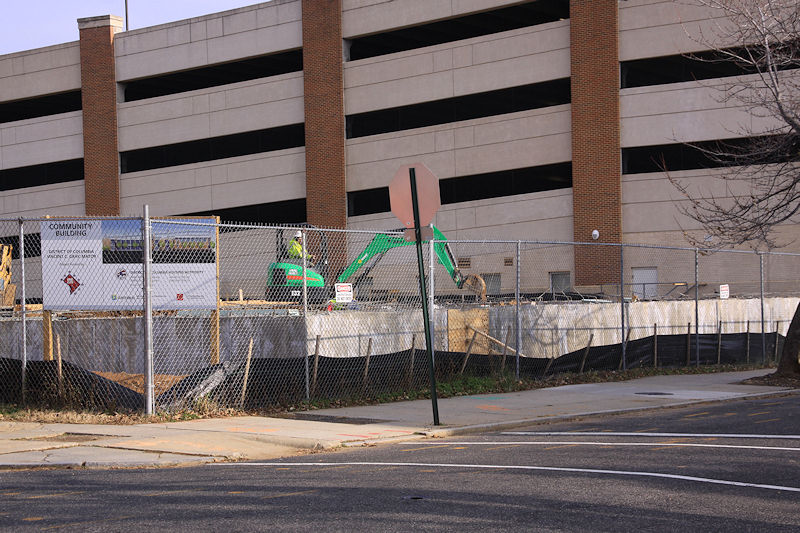 Digging continues at the 1111 New Jersey apartment project (above left), with the shoring at far left helping to give a sense of how far down they've gotten so far. (Spoiler: they have a long ways left to go.) And at the Capper Community Center Building House (above right), the foundation on the south end of the site along L Street is now a pretty sizeable structure.
It's hard to get a decent shot of the Lofts at Capitol Quarter construction, because the building is so long, though the wide open space of Nats Lot W helps. Vertical construction continues at the far east end, at 7th Street, while the western end waits its turn. Here's a big version of the latest image, to make it easier to see. (But remember, you can click on all photos to pop up larger versions.) 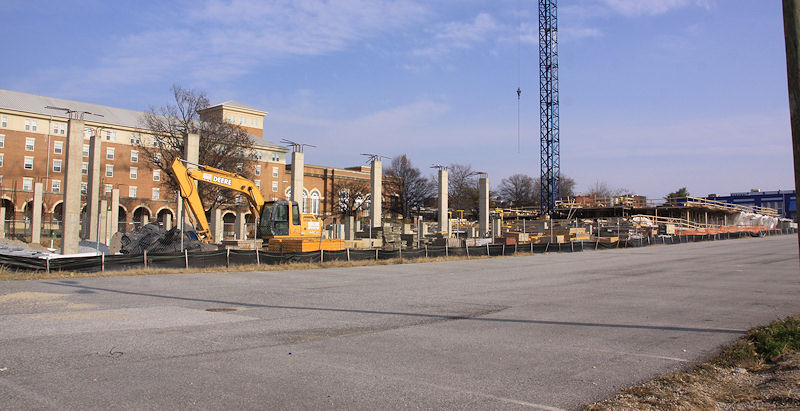 From there I wandered to the Yards (after rejoicing that the Hull Street Gate to the Navy Yard was closed, so I was able to take photos of the Lofts construction without hassle). The Arris apartment building is now getting its second floor, from south to north, as seen in the below left shot from the corner of 4th and Water. And a different sort of progress is visible a few feet away, in the windows of the northwest corner of the Lumber Shed. 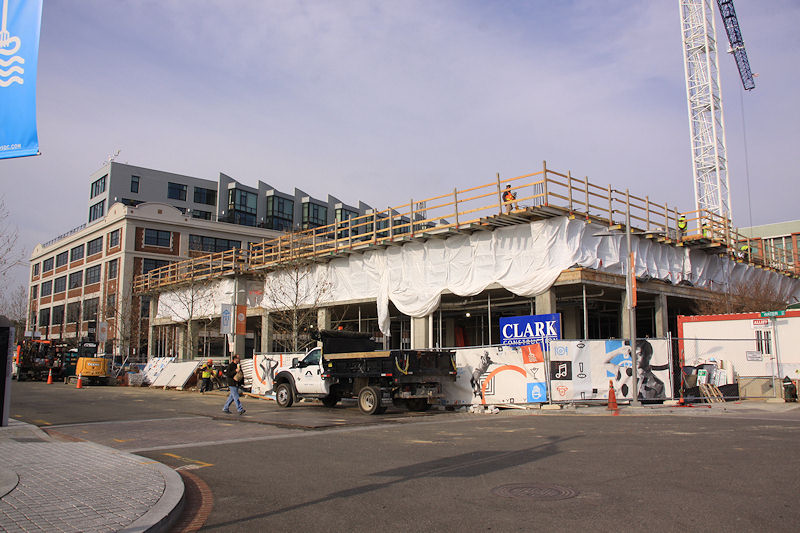 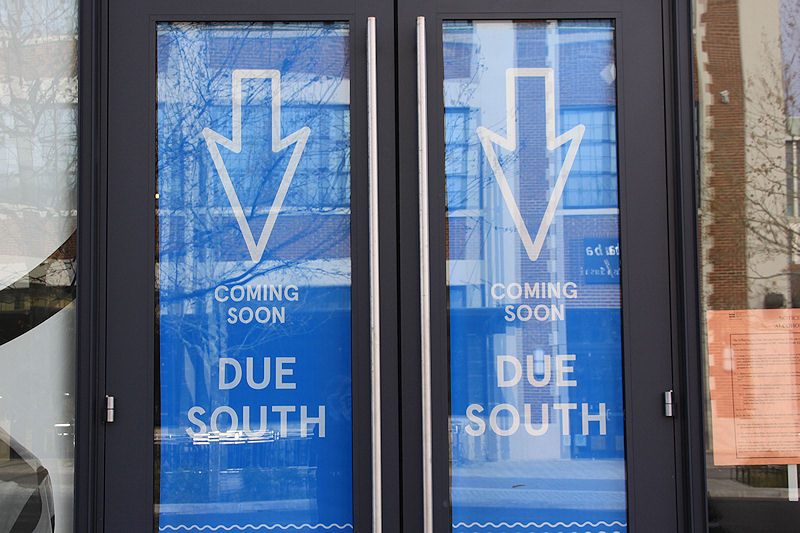 Not pictured is the lunch stop I made at 100 Montaditos, mainly to watch Mr. JDLand's continued march through the menu. 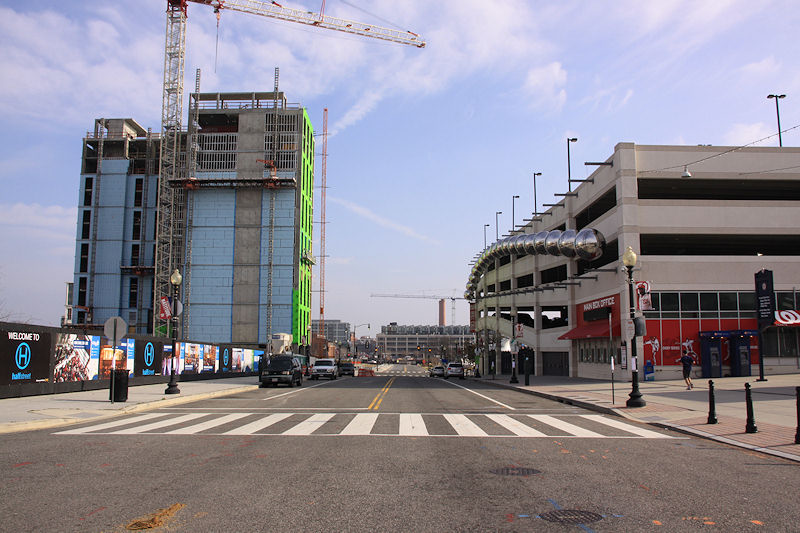 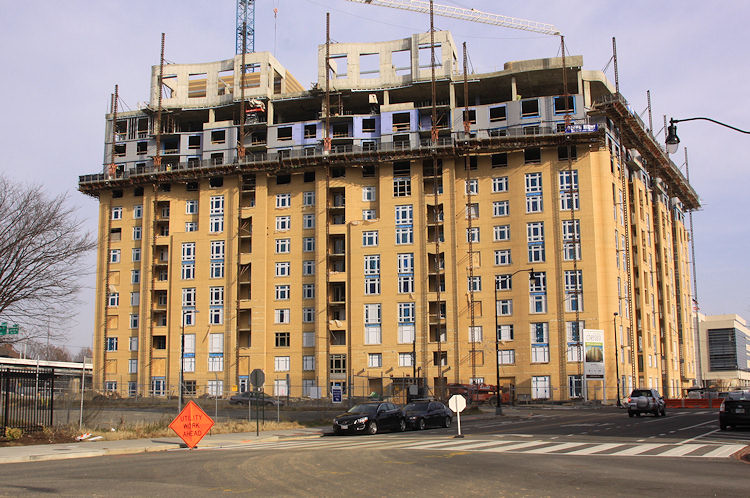 Meanwhile, the Hampton Inn at 1st and N (above left) continues to stand all but alone (I find myself thinking of it as Near Southeast's grain elevator). I also think I managed to capture a construction milestone when I spied its first installed windows. And, up at New Jersey and I, the Masonry Marathon continues at the Park Chelsea (above right), though it does look like that phase may not last too much longer.
There's one other batch of progress photos I took on Saturday, but you're just going to have to wait a bit longer for those.