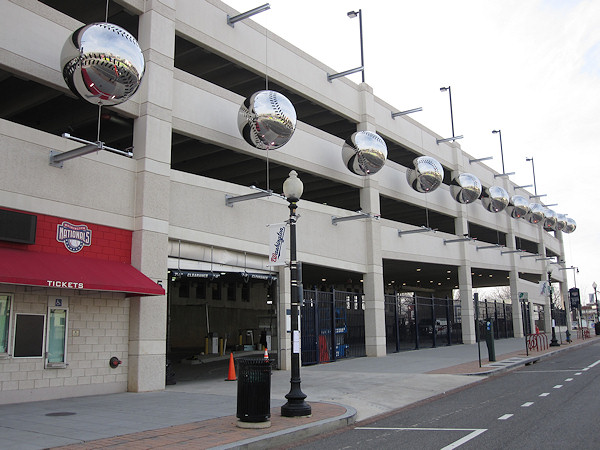 * I took a few photos (belatedly) of the newly installed stainless steel baseballs hung this week on the Nationals Park garages on N Street. You can see a hint of the red and blue LED lights that will "activate" the balls, though I imagine it will be more impressive when it's dark out. (Also, if you're as desperate in your Christmas shopping as I am, remember that the Nats Team Store at Half and N is open from 11 am to 5 pm every day except Sunday.)
* A reader reported this morning that the fences have been taken down around the all-but-completed 1015 Half Street office building, on the site of the old Nation nightclub. Douglas Wilson Companies, which took over the project when Opus East went belly up, had said when construction restarted in May that they would deliver 1015 Half by the end of the year, and they seem to have basically hit that date. No announcement of any tenants for the 440,000-square-foot building, though.
* The ANC 6D meeting is on Monday at 7 pm at St. Augustine's church at 6th and M streets, SW, but, as of now, no agenda has been posted. I'm sure it'll be a wonderful holiday potpourri of topics, though. (The agenda for Tuesday's ANC 6B meeting has been up for quite a while, and includes the new beer garden at 8th and L.) 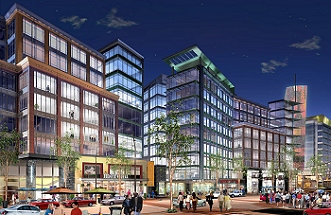 * A reader passed along this DCMud piece trying to play up movement on Akridge's Half Street project (just north of the ballpark), but I see a lot of "expects" and "luck" and "hope to" rather than any concrete start dates, and so, to me, that means there's really no news of impending construction. The fact that the Bullpen has apparently gotten it's lease renewed for the 2011 season would point to Akridge not expecting to do any work before fall. (And I'd also note that the first sentence gets everything wrong about the disposition of the Southeastern Bus Garage site, as is so often the case with DCMud items on Near Southeast: Akridge was the winning bid for the entire bus garage site in 2007, while Monument [which itself is not bankrupt, though its financial backer Lehman Brothers did croak] had earlier gotten the Metro station entrance on the other side of the street. Monument had owned land south of the bus garage, on the Bullpen site, but then sold that to Akridge in 2008.) The post also gives some background on the project, which might be new for people who haven't been following along, but which is basically what Akridge has been saying since they first unveiled the project two years ago.
You can see my Akridge Half Street project page for all of the details and renderings of the 700,000-square-foot office/residential/retail project, or, heck, read the zoning hearing transcript from January 2009. I think new residents will be happy about Akridge's long-mentioned plans for the "stall"-like vending area along the "Via" as well as a "neighborhood retail" feel for the Van Street side of the project, though people will probably be even happier about that once they know the project is actually going to start....