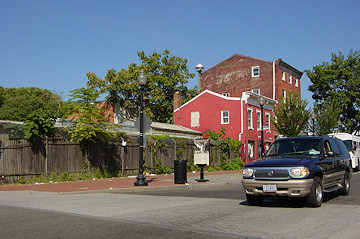 Despite having arrived fashionably late to tonight's ANC 6B ABC committee meeting, I still managed to get there in time to hear the initial presentation by Mark Brody on his plans for the "Bavarian Beer Garden" that he is looking to bring to the currently vacant northwest corner of 8th and L, SE. (This is the "Saints and Sinners" block, which is also going to have the National Community Church's new operations on the Miles Glass site on the north end of the block.)
As I've written previously, he and his business partner (who has owned the property for more than 20 years--Brody appears to have bought a half-interest in the lots earlier this year for $600,000, according to property records) are applying for a liquor license for a tavern/beer garden that would seat 99 customers inside, with space for another 200 outside in the summer garden. They're looking to be open from 11 am to 2 am Sunday through Thursday, and until 3 am on Friday and Saturday, with the hours of alcohol sales matching those "open" hours. They also want to have live entertainment (oompah! oompah!) from noon to midnight on Sunday, 6 pm to midnight Monday through Friday, and noon to 2 am on Saturday. Brody said it would be "upscale," with beer running around $7, and there would be food, though no menu has been determined yet.
Brody brought no drawings or designs, but said they would put a newly constructed building along 8th Street, with the entrance on the corner, and the beer garden would be behind it, butting up against the driveway from Miles Glass that punches through to L Street. (Brody and his partner own the two small buildings on the west side of the driveway.) Brody suggested that having a large nightlife offering south of the freeway would help pull people south on 8th, and make them less reticent to use the parking lot beneath the freeway (which tied into the discussion around the previous agenda item, another restaurant in the 500 block of 8th). He also mentioned the large surface parking lots that exist nearby that would have more than enough capacity to hold the large number of patrons his plans are for, though certain bloggers in the audience mentioned that the big one at 7th and L is probably going to see construction start on its north portion before too much longer.
There was considerable skepticism from the commissioners (especially chair David Garrison) when Brody said that he hopes to be up and running "by spring," especially since the lot is in the historic district and he would still need all of his designs approved by the Capitol Hill Historic Society and the city's Historic Preservation Review Board, as well as go through the not-always-smooth building permitting process.
He and his partner (who is in construction) are looking at building a smaller "temporary" building now, with a more permanent three- or four-story structure to come later. But when the commissioners expressed their concern about having very little to go on in terms of design and concept before they make a decision as to whether to support the liquor license application, Brody said that he and his partner won't be building anything without getting the license first.
Commissioners also mentioned "Heart and Soul" a few times, which Hill veterans will remember as the venture at 8th and Pennsylvania that got its approvals as a restaurant with some live entertainment and turned into a nightclub that became a nightmare for residents. "What you're giving me screams 'nightclub,' " said 6B05 rep Ken Jarboe.
Neil Glick of 6B08 talked about the size of the plans, that this would be the largest space on the Hill except for maybe Remington's, and that "we can't just give away" support without much to go on, especially since Brody has not had any dealings with 6B before.
Kirsten Oldenberg, in whose single-member district (6B04) this site is located, listed similar concerns, as well as the fact that, if the temporary building is a success, why would the owners ever then tear it down to build something better? She also mentioned the Lower 8th Vision draft plan that has just been submitted to the Office of Planning, wondering if this project fits in to that vision.
6B07 commissioner Carol Green separated herself a bit from her brethren by saying that she feels the area south of the freeway needs something now.
Jarboe then mentioned the possibility of writing into the voluntary agreement that the liquor license be temporary (three or four years) so that the project can get started soon, but "to give [the license] to you forever and ever opens us up for mischief later on."
The license is on the agenda for the full ANC 6B commission meeting on Tuesday (Dec. 14), at 7 pm at the People's Church at 535 8th St., SE, but with things like a voluntary agreement still needing to be written, along with probably some strong feelings about wanting more information, I'm not sure how the timeline is going to work out, with the liquor license hearing date set for January 3.
UPDATE: After deliberations (which were public but I mistakenly didn't stick around for), the ABC Committee has decided to support the liquor license application contingent on the applicant and the city's ABC Board agreeing to a Voluntary Agreement that limits hours and occupancy (terms to come). 6B is also going to argue for a temporary license (as I described above), but it's not clear that the ABC Board would go along with that. There will be more discussion of this at Tuesday's full ANC meeting.
Dec 9, 2010 10:31 AM
Democrats Looking to Name USDOT for Rep. Oberstar 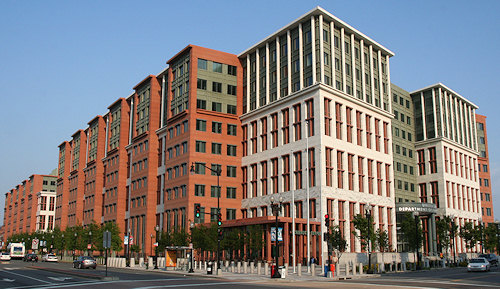 This morning WBJ's Michael Niebauer tweeted news about a bill introduced in the House of Representatives on Wednesday to name the US Department of Transportation headquarters on M Street, SE, for retiring Minnesota Democrat Jim Oberstar, who is described on his own web site thusly: "In the 34 years he has served in Congress, Jim has become known as the body’s leading expert on transportation policy. From 1989 through 1995, he chaired the Subcommittee on Aviation, passing important legislation that has led to better maintenance and safer aircraft. Later, as the ranking democrat of the full Transportation Committee, he worked in a bipartisan manner to take the Highway Trust Fund off budget to ensure that gas taxes are used to fix roads and bridges and not to make the budget deficit look smaller."
The bill has 45 co-sponsors, including DC delegate Eleanor Holmes Norton, who led the push to get USDOT to move to what was then known as the Southeast Federal Center nearly a decade ago. The building, which houses 7,000 federal workers in 1.35 million square feet on 11 acres, opened in spring, 2007.
Knowledgeable Hill observers (*cough*brother*cough*) say that the bill is likely to get through the Democratic-controlled House, but as with everything in Congress-land these days, who knows what might happen when it hits the Senate.