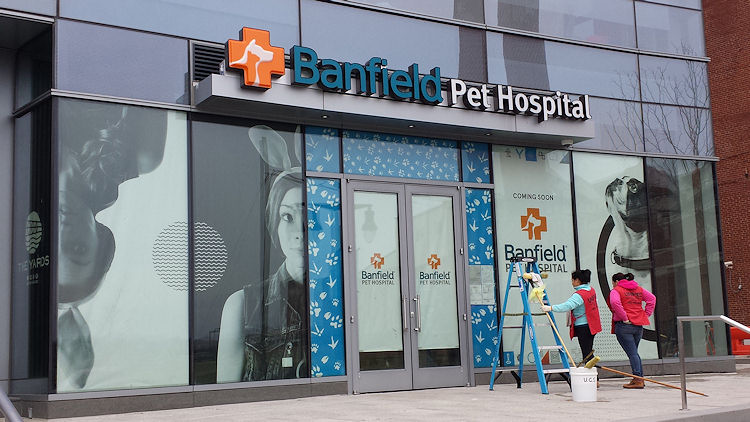 More notes about buildings and food:
* BANFIELD: The sign is now up, and "early 2015" looks on track for the Banfield Pet Hospital at Twelve12 on Tingey Street in the Yards.
* 82 I: The lot has been cleared of cars, a new fence has been put up and construction-related signage ("Hard Hats Required") has appeared on the northwest corner of New Jersey and I, where Graystar's 234-unit residential building appears to be ready to get underway the second its shoring/excavation permit comes through.
* FLORIDA ROCKIN': Excavation permits for the first phase of Florida Rock's redevelopment were approved a few weeks ago (hence the beginning of earth-moving), and as of Friday there's now an approved permit for the nine-story apartment building itself. The project's ceremonial groundbreaking is scheduled for tomorrow morning (Dec. 9) at 10 am--in a tent, thank heavens. Given that it took more than a decade to get this project to the digging phase, you can't blame developers MRP Realty and Florida Rock Properties for going beyond the normal speeches and ornate shovels: they are having a pig roast as well, after the ceremony until about 3 pm.
* 100 MONTADITOS: It looked very very close to opening last week, but there appears to have been some sort of fly in the ointment (or a Spaniard in the Works, if you will). The Yards tweeted this morning that it is opening this Thursday. Mr. JDLand is monitoring the situation closely. UPDATE: A missive from the Montaditos folks confirms the Thursday opening, with a "Dollarmania" promotion through Sunday, Dec. 14, with all Montaditos sandwiches selling for $1. There will also be $2 beers and sangria and $3 premium beer and wine for the eatery's first 100 days.
* WILLIE'S: Now offering brunch on Saturdays and Sundays from 11 am to 3 pm.
* OSTERIA MORINI: "Morini Mondays" begin tonight, with $10 pasta dishes.