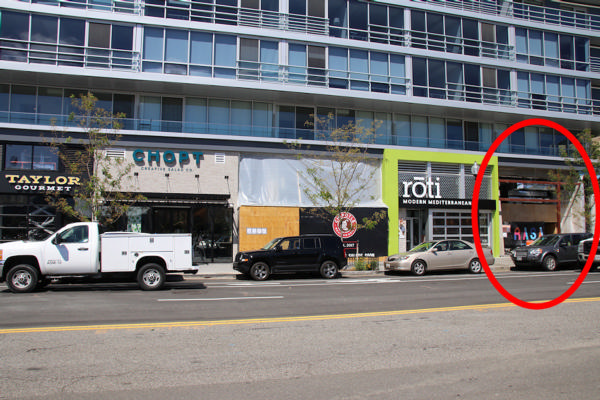 * RASA ALMOST HERE: According to City Paper, Rasa Indian Grill will be opening its doors in the ground floor of F1rst on Wednesday, Dec. 6. (I'm not surprised that I don't have a recent shot of the Rasa front, but I can't believe I don't have a decent NOT-recent shot of it, either. Argh.) The City Paper piece has a lot of background on the restaurant's format and background. And on Instagram Rasa says that they will be opening from 12-2 on Tuesday Dec. 5 to support DC Central Kitchen.
* OATH PIZZA: The sight of workers in the retail space next to Bethesda Bagels in the ground floor of Insignia on M has been noticed; but what I and my normally deep-digging commenters missed was the news back in October that Boston-based Oath Pizza would be coming to that address in early 2018--and boxes inside the space do indeed say "Oath Pizza" on them. A Merrifield/Mosaic location opened about a month ago, and WTOP says that not only does Oath bill itself as the "only existing certified-humane pizza restaurant in the country," it "has what it calls a trade secret thin crust, that’s hand-stretched, grilled and seared in avocado oil."